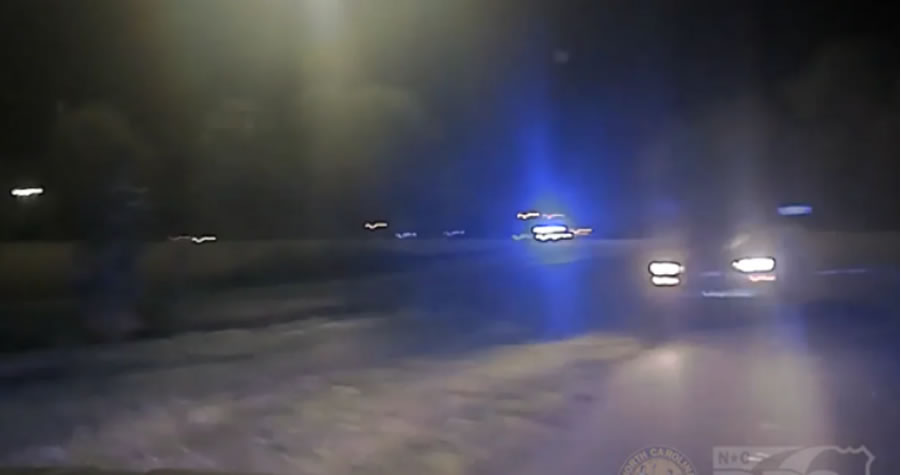 A North Carolina State Highway Patrol trooper is being heralded as a hero for putting himself in danger to stop a suspected drunk driver. The brave and selfless actions of the state trooper may have saved lives.

In the early morning hours of April 8, several police officers were in pursuit of a driver accused of driving while intoxicated. North Carolina State Highway Patrol said Trooper Cody Thao joined the effort to stop an alleged drunk driver to prevent innocent people from being harmed or killed by the erratic driver.

The suspect – Joshua Ray Bibey – was speeding up an exit ramp in the wrong traffic direction. Thao was coming off the exit ramp in the correct direction. With only seconds to make a decision, Thao unselfishly and gallantly steered his police cruiser towards the oncoming vehicle. Thao’s patrol car violently collided with the 26-year-old suspect’s vehicle – which appears to be a pickup truck. Police dashcam video shows Thao’s cruiser spin off the road after slamming into the vehicle in Wake County.

Thao intentionally drove into the DUI suspect, knowing that the driver was speeding toward the interstate exit – where other cars could have been exiting.

Bibey, of Raleigh, was arrested and charged with driving while impaired.

We're taking you through this wild video put out today by @NCSHP tonight with the trooper whose action saved lives.
Cody Thao: "All the credit goes out to the other troopers who inspire me on a daily basis especially here in Wake County" #abc11 #ncshp pic.twitter.com/PRwF9TwauE