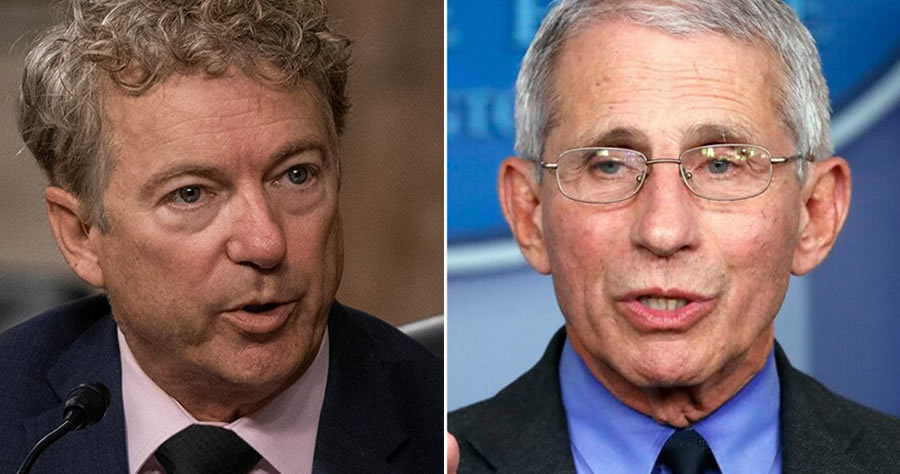 Dr. Anthony Fauci may have suddenly vanished from the nation’s television screens but at least one Republican lawmaker is taking measures to prevent the bureaucratic tyranny of the last two years from happening again with an effort to strip him of his vast and unaccountable powers.

Senator Rand Paul, who frequently clashed with a man whose rejection of longstanding American principles such as individual freedom, plans to introduce an amendment to eliminate Fauci’s position as the head of the National Institute of Allergy and Infectious Diseases and distribute his power into three new institutes.

In a Monday column for Fox News, the Kentucky Republican writes, “The toll of COVID doesn’t stop there. We lost more than individuals. We lost our freedoms. Our liberties. Our vibrant small town Main Streets. Our children’s growth and learning. For two years our lives were held captive by petty tyrants and power-hungry bureaucrats.”

“We’ve learned a lot over the past two years, but one lesson in particular is that no one person should be deemed “dictator in chief.” No one person should have unilateral authority to make decisions for millions of Americans,” he added.

“To ensure that ineffective, unscientific lockdowns and mandates are never foisted on the American people ever again, I will introduce an amendment to eliminate Dr. Anthony Fauci’s position as director of the National Institute of Allergy and Infectious Diseases and divide his power into three separate new institutes,” Paul wrote, an idea likely to be fiercely resisted by the elfin career bureaucrat and his followers who worship him with cult-like devotion.

Paul’s amendment would be one way to pry control of the NIAID away from Fauci who has headed up the massive agency since President Ronald Reagan’s first term in office and where he controls billions of dollars in funding, including money that may have gone to the Chinese lab where dangerous “gain of function” research was conducted and where many believe that COVID escaped from.

The senator proposes that “Each of these three institutes will be led by a director who is appointed by the president and confirmed by the Senate for a five-year term. This will create accountability and oversight into a taxpayer-funded position that has largely abused its power and has been responsible for many failures and misinformation during the COVID-19 pandemic.”

“No one person should have the sole authority to dictate science, especially when that one person wasn’t ever following the science. I’ve said that from the beginning, and I’ve been proven right over, and over, and over again. On masks, lockdowns, schools, natural immunity, all of it,” he said.

“A rational person might ask, how in the world did it take us so long to get to the truth? Why did we spend two years not following the science?” Paul added, “Well again, that’s what happens when “the science” is dictated by one man, an unelected bureaucrat with far too much power.”

The power-drunk Fauci has often presented himself as being “the science,” which he did in a chilling CBS interview where he let the mask slip to reveal the petty tyrant who serves as President Joe Biden’s top medical adviser, scoffing at the idea that he is subject to congressional oversight.
In his column, Paul assails the lockdowns that destroyed lives, devastated small businesses and shuttered schools, inflicting grave and possibly lasting damage on the nation’s children whom he called the biggest victims of the COVID authoritarians.

“All across the country, millions of kids haven’t experienced a normal school day since the beginning of 2020. Whether it be virtual learning, having to wear masks all day, being separated by plexiglass, mandatory vaccinations, weekly or daily testing, canceled extracurricular activities, sports, and events, nothing is normal and it’s scarring our children,” Paul wrote.

He also took issue with the masks that have become a political symbol of the Biden and the left, writing, “When Fauci misinforms the public that cloth masks work, he risks the health of anyone who believes a cloth mask will protect them when caring for a spouse or relative with COVID.”

“The biggest lesson we have learned over the last two years is that no one person should have this much unchecked power. And my amendment, which will get a vote this week, will finally force accountability and fire Dr. Fauci,” Paul concluded.

While Fauci’s disappearance conveniently coincided with Democrat concerns that draconian COVID restrictions could adversely affect their electoral prospects, he could reemerge after the November midterms to lead another round of lockdowns if the party is able to retain control of Congress, making Senator Paul’s proposal one that is of the utmost importance.