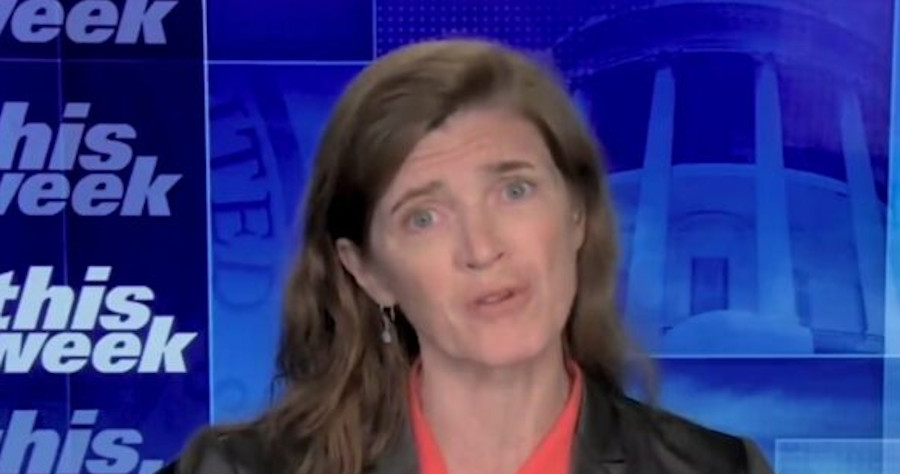 One of the disastrous consequences of Biden-era supply chain disruptions that are now being exacerbated by overseas wars and indirectly because of U.S. sanctions is that farmers are now seeing fertilizer shortages. The use of high-nitrogen fertilizers is a modern farming technique, but it often requires natural gas in the production process.

Samantha Power, a former ambassador to the United Nations under Obama, and currently an administrator of USAID under Biden, appeared on ABC News’

“Fertilizer shortages are real now because Russia’s a big exporter of fertilizer,” Power said. “And even though fertilizer is not sanctioned less fertilizer is coming out of Russia. As a result, we’re working with countries to think about natural solutions like manure and compost.”

“And this may hasten transitions that would’ve been in the interest of farmers to make eventually any anyway,” she crowed. “So, never let a crisis go to waste. But we really do need this financial support from the Congress to be able to meet emergency food needs. So we don’t see the cascading deadly effects of Russia’s war…”

So, if you’re following along, Power is simultaneously championing policies such as abandoning fertilizer, which will add to the already soaring food prices; meanwhile, she is also advocating for more ’emergency’ food aid. It doesn’t get any more transparently socialist than that.

At a March press conference at a NATO summit in Brussels, Belgium, following a meeting with other world leaders, Biden said: “With regard to food shortage, yes we did talk about food shortages, and it’s gonna be real.”

“The price of the sanctions is not just imposed upon Russia,” he added. “It’s imposed upon an awful lot of countries as well, including European countries and our country as well.”

Biden’s warning of a “real” food shortage was followed by White House press secretary Jen Psaki saying that Americans were unlikely to face a food shortage.

“While we’re not expecting a food shortage here at home, we do anticipate that higher energy, fertilizer, wheat, and corn prices could impact the price of growing and purchasing critical fuel supply, food supplies for countries around the world,” Psaki said. “And early estimates from the World Bank suggest disproportionate impacts on low and middle-income countries including in Africa, the Middle East, and Southeast Asia.”

As Farm Journal reported, food prices are already at a 14-year high, and the U.S. Department of Agriculture (USDA) forecasts them to go even higher.

“Taking the midpoint of USDA’s forecast ranges, all food price inflation would be the highest since it was 5.5% in 2008 with food at home (grocery store) inflation also the highest since 2008 when it was up 6.5% from the prior year,” the report added. “The 20-year average for food price increases at 2.4% for all food, 2.9% for restaurant prices and 2.0% for grocery store prices means the current outlooks are for costs that are at least double those averages.”

Power’s utterance of the phrase “never let a crisis go to waste” perfectly describes the Democratic Party’s current governing philosophy. Hillary Clinton breathed new life into the term when she told an audience in 2009 about using “climate change” to push the green energy agenda.

“Never allow a good crisis go to waste,” he said. “It’s an opportunity to do the things you once thought were impossible.”

Hillary Clinton in 2020, while endorsing Joe Biden, wanted to use the Covid pandemic to push for universal socialized medicine. She also invoked a variation of the term.

The Democratic Party’s socialist playbook has gotten pretty obvious that even liberal cable show host Bill Maher has called it out. Maybe it’s time for the Democrats to stop exploiting crises – even exacerbating them – and try doing positive things for the American people for a change.

Food prices are already a crisis for poor and lower middle-class families. The Biden administration’s tone-deaf response has been to champion policies that will push them even higher, while ramming through socialist powers that will give the corrupt ruling class more power. It’s not only tone-deaf, it’s extremely reckless.