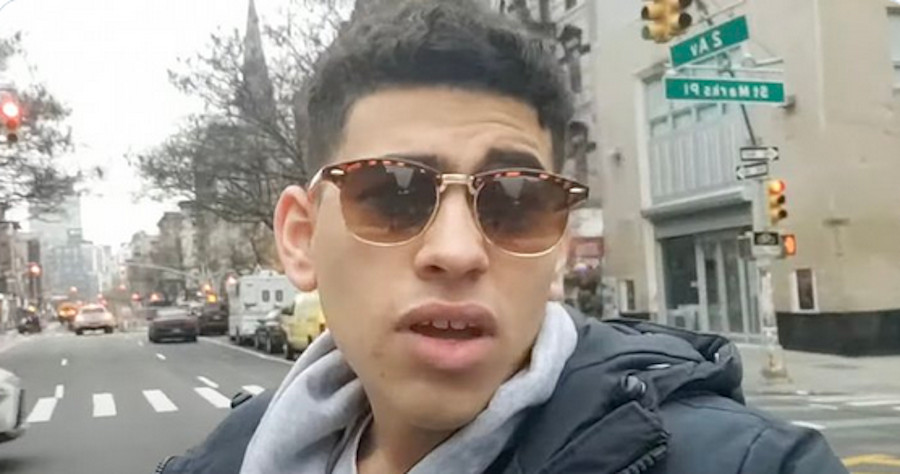 A man who identifies as an “incel” claimed he had a bomb and then threatened to kill diners for Allah, but ended up receiving no jail time for his tasteless prank.

Malik Sanchez, 20, was sentenced on April 13 for claiming he had a bomb and telling two women at a New York City restaurant that he was going to kill them. He could have received a sentence of up to five years in jail for portraying himself as a suicide bomber, but got away with a much lighter one.

A man who promoted himself as an incel — online shorthand for “involuntarily celibate” — gets no prison time for livestreamed bomb threat.

Malik Sanchez made a name for himself in a toxic subculture that encourages vengeance against women.https://t.co/ohecVrmdpX

Sanchez was 19 when he pulled the hoax. He has also self-identified as an “incel,” which refers to being an involuntary celibate, and hopes to join the military, according to a report by the New York Post.

Before Sanchez was sentenced, he apologized to the women he threatened and said the bomb hoax – which he livestreamed on the Internet – was the result of him being an “immature and reckless child,” according to the same report.
Last November, Sanchez entered a guilty plea at a Manhattan federal court for conveying false and misleading information and hoaxes over the February incident outside a Flatiron restaurant, Daily Mail reported.

Sanchez’s sentence included time served already — which had only been 23 days, and nine months of home confinement. He also has to complete three years of supervised release.

Malik Sanchez hopes to join the military – and he will likely have no trouble getting in.https://t.co/80PqzTdnj7

>> Frderal judge allows criminal to be free of time in prison.

The judge noted that imposing a no-jail sentence was a tough call because of the trauma suffered by the victims, yet she referred to Sanchez as a “pretrial success story.”

“Manhattan federal court Judge Colleen McMahon interrupted his spiel, telling Sanchez his actions were ‘that of a sicko’ – but agreed with his court-appointed lawyer that he had taken steps to turn his life around.

“The judge said Sanchez, who earned his high school diploma in the time since his arrest and hopes to join the military, is a ‘pretrial success story.’

“McMahon sentenced Sanchez — who had faced up to five years behind bars — to time served, counting the 23 days he spent locked up after he was busted and nine months of home confinement.

“In letters submitted prior to sentencing, the victims described how terrified they were when Sanchez ran up to them at a Flatiron District restaurant and said he was going to ‘enhance their meal.’”

According to the same report, charging documents indicate that Sanchez had yelled at both women:

Malik Sanchez had live streamed a video where he pretended to be a ‘suicide bomber’ to scare two female diners outside a restaurant in Manhattanhttps://t.co/peJxPn5JmF

One of the women wrote in a victim-witness letter that she was forced to move out of state due to being so scared by Sanchez’s bomb hoax:

“For the next several weeks, I lived with my parents in Pennsylvania, too afraid to return to life in the city. I was convinced that a terrorist was operating in my neighborhood, ready to actually use violence at any given time.

“Mr. Sanchez altered my faith in humanity and made me realize there are truly bad people out there who enjoy seeing others suffer.”

When Sanchez pleaded guilty to the hoax last November, the prosecution team pushed for him to be locked up because he already had seven prior arrests from when he was a teen, New York Post reported.
Assistant U.S. Attorney Kaylan Lasky said:

“He’s been a menace to the community for years all while spouting incel ideology.”

Judge McMahon reportedly warned Sanchez that she would likely send him to prison if he does not comply with all the restrictions the federal probation department imposes on him:

“Someone is going to be looking over your shoulder for the next three years. And that is appropriate for what you did.”

Last November, Daily Mail reported that Judge McMahon previously released him to home confinement three weeks after his arrest for the incident:

“At a court hearing in May, Judge Colleen McMahon released him to home confinement three weeks after his arrest, saying she had watched the video.

“‘The first thing I thought was, this is a kid who needs to be seeing a psychiatrist, this is somebody who needs mental health counseling,’ McMahon said.

“‘Anybody who thinks what I saw in the video was funny is definitely in need of mental health care, definitely.’”

Despite livestreaming himself threatening to blow up a restaurant, Malik Sanchez avoided going to prison.@MilesKlee on the precedent this sets for other violent incels https://t.co/0jOHQuXy2c

On Feb. 13, 2021, Sanchez had posted a video on his YouTube channel that showed him loudly stating that a bomb was about to go off near a table where two women were sitting eating a meal.

After saying a bomb was going to detonate, the women and several other diners quickly fled from the restaurant. Sanchez is heard laughing during his live-streamed video.

“Sanchez could be heard laughing having been egged on by viewers to his live-streamed video — some of whom even paid him cash tips.

“At least one person called 911. By the time police had responded to the scene, Sanchez was nowhere to be found, but he had left video incident of his sick joke online.

“That clip has since been removed from his official channel, although it remains on other news reports about the incident.”

Daily Mail reported that Sanchez has other disturbing videos on his YouTube channel:

Malik Sanchez Wiki – Malik Sanchez Biography
Malik Sanchez allegedly walked up to the two women eating at the outdoor seating area of the Flatiron District restaurant and said he was going to, “Enhance their meal.” “Allahu Akbar. Allahu Akbar. pic.twitter.com/zU9htcalHg

“On another one from earlier this year he could be seen yelling at two women walking down the street staying he had ‘incel rage.’

“He was also filmed using anti-Semitic language, and shouting the n-word at two young black women out walking close to Washington Square Park.

“He also stated he was a supporter of Elliot Rodger, a man who is credited with starting the incel movement. It stands for ‘involuntary celibate,’ and is comprised of men who consider themselves too unattractive to find a partner.

“Rodger murdered six women including two from a sorority house in California in 2014.

Daily Mail’s report also indicated that many of Sanchez’s videos last for several hours and include him approaching random strangers in the street, usually young women, and insulting them:

“Sanchez will often follow his subjects for several blocks at a time while continuing to stalk his subjects, emboldened by followers on YouTube who donate money for him to carry out further acts of irritation.

“He had been arrested in the past for scaling the Queensboro Bridge and pepper spraying at least five people during other livestreamed stunts.

“Sanchez pleaded guilty to disorderly conduct for scaling the bridge which was he livestreamed last year.