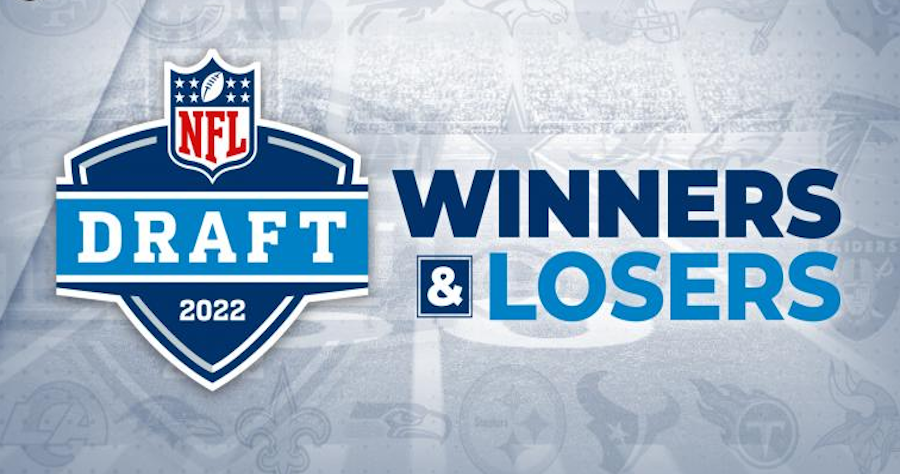 The first round of the 2022 NFL Draft offered more than a few surprises on Thursday night.

Pitt’s Kenny Pickett was the first quarterback taken at No. 20. There were a flurry of first-round trades where teams moved up and down the board.

Wide receiver was the story of the first round, which started when Atlanta took USC’s Drake London with the No. 7 pick. From there, six receivers were selected in the first round. Arizona traded for Marquise Brown, and Philadelphia traded for A.J. Brown. Green Bay and Kansas City didn’t address the receiver position, which was another surprise.

Who were the biggest winners and losers in the first round? Sporting News takes a closer look.

There shouldn’t be boos coming from the Big Apple.

First-year Giants general manager Joe Schoen had a good track record as Buffalo’s assistant GM from 2017-21. The Giants made two value picks with their top-10 picks to anchor both sides of the ball.

Oregon edge rusher Kayvon Thibodeaux fell to No. 5 behind Georgia’s Travon Walker and Michigan’s Aidan Hutchinson. Thibodeaux, who had 19.5 sacks and 35.5 tackles for loss in 30 college games, has the tools to be a better edge rusher than both. Rookie Aziz Ojulari led the Giants with eight sacks last season. Thibodeaux offers help on the other side.

Alabama tackle Evan Neal went two picks later at No. 7 in a pick acquired from Chicago. Neal, a 6-7, 337-pound tackle, is an anchor on the offensive line that is another first-day starter. It’s not a flashy first day, but Schoen took the best players available.

The Jets improved with an impressive three-pack. Jets general manager Joe Douglas grabbed Cincinnati cornerback Ahmad Gardner with the No. 4 pick and Ohio State receiver Garrett Wilson with the No. 10 pick.

Gardner is more than just “Sauce,” the flashy nickname he acquired with the Bearcats. He’s a lock-down cornerback that will improve a secondary that allowed 28 TD passes with just interceptions in 2021.

Wilson was the second receiver selected behind USC’s Drake London. Wilson has the upside that he could challenge last year’s outstanding rookie receivers in production, and he gives Zach Wilson an immediate vertical threat.

The Jets added a third pick when they traded up with Tennessee for the No. 26 pick and grabbed a dynamic edge rusher in Jermaine Johnson, who had 11.5 sacks and 17.5 sacks for Florida State last season. Johnson slid down the board a little more than expected, and the Jets pounced on that value.

Houston had an extra first-round pick after trading Deshaun Watson. Did Houston maximize that value under first-year coach Lovie Smith?

It doesn’t feel that way. LSU’s Derek Stingley Jr. has some enormous potential, but the production didn’t always match the talent in three seasons with the Tigers. Houston reached to take Stingley at No. 3.

Houston then traded down two spots from No. 13 with Philadelphia, which used the pick to take Georgia defensive tackle Jordan Davis. The Texans grabbed Texas A&M guard Kenyon Green, a versatile offensive linemen who can play guard or tackle.

Eagles GM Howie Roseman worked the draft board and made the blockbuster trade of the night.

Philadelphia traded up to No. 13 with the Texans and added Davis, a freakish 6-foot-6, 340-pound defensive tackle who was the anchor of Georgia’s national championship defense in 2021. Davis gets to learn from veteran defensive tackle Fletcher Cox and could give the Eagles an elite interior defense that already ranked No. 9 against the run last season.

Then, the Eagles traded the No. 18 pick to Tennessee for receiver A.J. Brown, who gives quarterback Jalen Hurts a legit No. 1. Brown has two 1,000-yard seasons and averages eight TDs per season. That’s a win-win for Philadelphia, if they choose to pay Brown a long-term contract.

Green Bay traded Davante Adams to Las Vegas, and Kansas City traded Tyreek Hill to Miami this offseason. What did those Super Bowl contenders do to address the position in the first round?

Well, they went with defense instead.

Green Bay drafted Georgia teammates Quay Walker at No. 22 and Devonte Wyatt at No. 28, and Kansas City grabbed Washington cornerback Trent McDuffie at No. 21 and Purdue’s George Karlaftis at No. 30. On one hand, the Packers and Chiefs didn’t chase at the position after the run was completed.

On the other hand, neither team made a bold move or traded up to give MVP-caliber quarterbacks Aaron Rodgers and Patrick Mahomes another target.

Baltimore GM Eric DeCosta and coach John Harbaugh knew when to stay put and when to make a move.

Notre Dame’s Kyle Hamilton was a top-five pick in most mocks. Baltimore didn’t move at the No. 14 spot, and used the pick to draft Hamilton, a play-making safety who will help a secondary that was riddled by injuries last season. Hamilton is the ideal chess piece for new defensive coordinator Mike Macdonald.

As for the second pick. The Ravens traded Marquise Brown to Arizona for the No. 23 pick, then slid down two spots after trading that pick to Buffalo. Baltimore used that to draft Iowa center Tyler Linderbaum, the best center on the board who will help the interior from Day 1.

It’s always dangerous to trade within the division because it will get talked about for years.

Minnesota traded out of the No. 12 pick with Detroit, and the Lions used that pick to take Alabama receiver Jameson Williams, part of an impressive two-pick plan that included Hutchinson at No. 2.

The Vikings, which have a new coach in Kevin O’Connell, picked up a second- and third-round pick from the Lions, and that makes Minnesota one of the teams with the most pressure on Day 2.

It circles back to Williams, who could be a No. 1 for Detroit for years to come. This is a trade both sides will bookmark.

The Steelers went with the home-town pick with the No. 20 pick. Pickett became the first quarterback to be selected with the No. 20 pick in the Super Bowl era, and he’s going to a stable organization that will allow for a year to develop behind Mitchell Trubisky.

Is it the right move for the Steelers? The AFC North is flush with quarterback talent in Joe Burrow, Deshaun Watson and Lamar Jackson. Pickett might not have that kind of raw talent, but he is coming off a season where he led Pitt to an ACC championship with 4,319 yards, 42 TDs and seven interceptions. He’ll be a fan favorite in the vein of former Steelers running back James Conner, at least for a few seasons. Pickett’s hand size was a popular topic at the NFL Combine, but that will only get brought up if he struggles at the next level.

Willis was expected to be the first quarterback selected in the draft, but the Liberty star falls to Day 2.

Willis put up impressive numbers in Hugh Freeze’s offense with the Flames, and he had an impressive Pro Day. He didn’t play much against Power 5 competition, but it’s still a surprise to see a quarterback mocked that high fall into the second-day realm with Cincinnati’s Desmond Ridder and Ole Miss’ Matt Corral.

It’s also an indication that Willis is seen more as a developmental project than Day 1 starter in the NFL.

Georgia won the national championship in 2021, and the Bulldogs set a record with five defensive players selected in the first round.

That started with Jacksonville taking edge rusher Travon Walker with the No. 1 pick and ended with Minnesota taking Cine. The Packers took Walker and Wyatt, and the Eagles grabbed Davis. The surprise was All-American linebacker Nakobe Dean sliding to the second round.

It’s a recruiting tool Georgia coach Kirby Smart will be able to use for years to come.