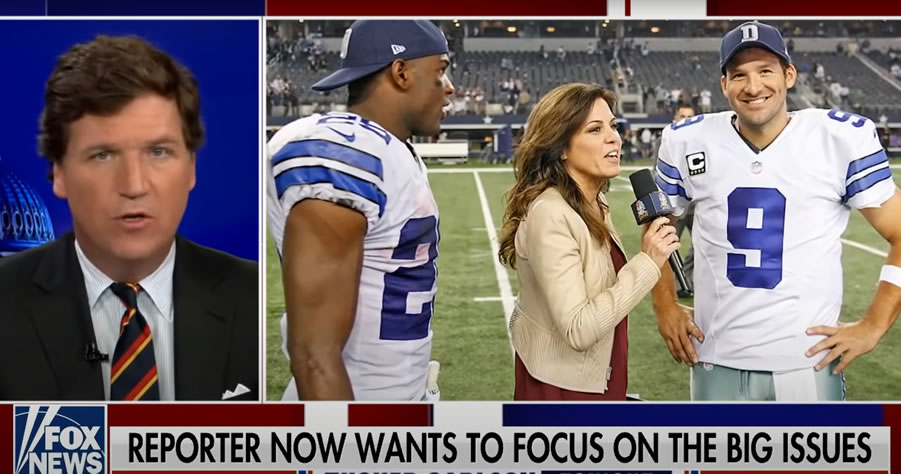 NFL sideline reporter Michele Tafoya explained her decision to leave NBC sports and to get involved in politics on “Tucker Carlson Tonight.”

“After nearly 30 years covering sports, Michele Tafoya has decided to step away from NBC Sports,” host Tucker Carlson said. “What an interesting decision that you made. Why did you make it?”

Tafoya explained that moving on to something where she can “give back” to America has been nagging at her conscience for quite some time.

“This has been on my mind. I’ve been waking up every day with a palpable pull at my gut. My middle-ground, … moderate viewpoint is not being represented to the rest of the world. And so rather than, you know, just banging it out on Twitter or Instagram every day – I thought – I’ve got to do something. I have benefited greatly from the American dream, and I feel like for the sake of my kids and because I so love this country, I’ve got to start giving back,” she said.

Tafoya went on “The View” in November and slammed what she believed was segregation at schools. She explained that her son’s best friend was a person of color, and that they didn’t hang out as much because of the school’s affinity programs.
“My son’s first best friend was a little African-American boy. They were inseparable. Get to a certain age they start having what’s called an affinity group, which means you go for lunch and pizza with people who look like you … At kids in school, there is a big, big focus on the color of your skin and my children … Why are we even teaching that the color of the skin matters? Because to me, what matters is your character and your values.”

Tafoya told Carlson that she is unafraid of the repercussions of what she says.

“I don’t care if I’m attacked. I really am not afraid of that, and I guess I feel like so many people now are afraid. Yeah. And I’m not. Listen, I know there are repercussions for whatever I choose to say. And I’ve talked to my kids’ school about it. You know, please don’t hold this against my kids. I’m speaking for me. I’m speaking for my family. But please don’t hold this against my kids.”

SPEAKING OUT: @TuckerCarlson guest Michele Tafoya left her job as a NFL sideline reporter in order to have a voice against CRT and other radically progressive policies. pic.twitter.com/kuqNjBZsCY

Thank you, Michele Tafoya, for being the gold standard in our industry, man or woman.

You may be stepping away from the sideline, but you have opened the door for so many, and shown all of us how to do it right. No gimmicks. Sheer intellect, passion and integrity. Always. 🙏