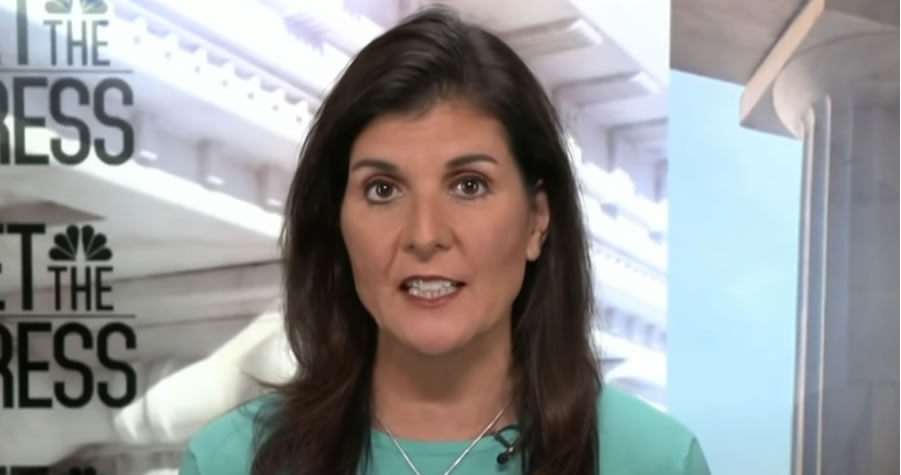 Former United States Ambassador to the United Nations Nikki Haley slammed President Joe Biden and his administration for buying oil from Russia with the ongoing Russian invasion of Ukraine.

During an interview on “Meet the Press,” Haley told host Chuck Todd that Biden’s decision to continue buying oil from Russia was essentially making a deal with the devil.

Haley argued that the U.S. needs to hold Russia accountable by withholding investment in Russian oil.

She also called for the Biden administration to work with Ukraine on intelligence as well as sending them “anti-tank, anti-air missiles immediately.”

TODD: “Well, one could argue that there’s been 20 years of appeasing Putin; that there was this belief that he could be part of the world order. Was that a mistake from the get-go?”

HALEY: “No. I’ve always said that you cannot trust Russia. You cannot trust Putin. You can’t trust Xi. You can’t trust China. This is — it’s common sense. I’ve dealt with them at the United Nations. You never negotiate, you never deal with your enemies. You can’t trust them. And that’s why I was mortified that Biden went so far as asking China for help with Russia. I mean, you never ask an enemy for help with another enemy. I never told China anything that I didn’t want Russia to know. Because you know how they coordinate. It’s the same reason why it’s unthinkable that Biden would be coordinating or even thinking of getting back into the Iran deal with the Russians and Chinese at the table. Why are we negotiating and trusting enemies? You don’t do that. That’s the first start to being strong in America, is understand who your enemies are and make sure that you let them know that you understand them.”

TODD: “So, you treat — you would not — there’s one thing that you would treat China as an enemy, not as a rival, if you will. You wouldn’t work with them diplomatically at all if you were in charge right now?”

HALEY: “Do you know what — I mean, China right now has coordinated with Russia. When Biden went and told China what was going on and asked for help with Russia, what did China do? China ran and told Russia. I watched at the United Nations, those two countries are getting incredibly close. They don’t like each other, they don’t trust each other, but they both want to destroy the West. Why are we waiting for that to happen? China, when they take Taiwan, this is going to blow up. Right now, Taiwan’s manufacturing half of the semiconductor chips. What do Americans use? They use their phones, they use their computers, they drive cars. All of that will be disrupted. Why are we relying on China to give us medical supplies when we saw how they handled Covid in the world? We’ve got to wake up. America has to wake up. And we have to start being smart to deal with these tyrants. We can’t let them continue to run all over us.”