NRA Responds to Biden’s ‘Ghost Gun’ Crackdown: ‘Perhaps He Should Take a Look at Sentencing Reform’ 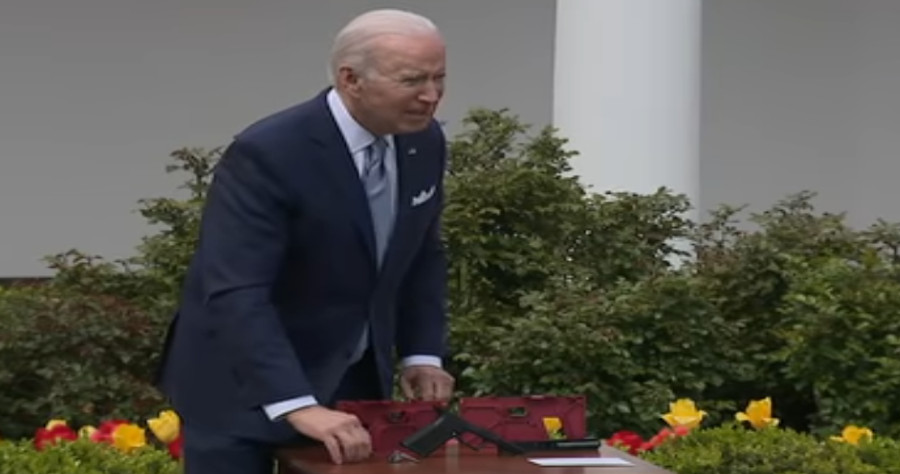 As he has done many times before, President Joe Biden on Monday blamed guns (“ghost guns” this time) for rising crime in the United States.

He announced a crackdown on “do-it-yourself” kits that allow people to assemble guns without serial numbers — as if the so-called “ghost guns” are driving the recent crime wave.

But completely missing from Biden’s speech was any mention of soft-on-crime prosecutors who release criminals to offend again. (Read the “fairness and safety” memo issued in January by New York District Attorney Alvin Bragg, who declared his “commitment to making incarceration a matter of last resort.”)

“If Biden were serious about real solutions to violent crime, perhaps he should take a look at sentencing reform to address the issue of violent criminals with long criminal histories being released after serving only 40% of their sentence — especially when they commit another violent crime,” the National Rifle Association’s lobbying arm wrote in response to Biden’s speech.

“Instead, GC (Gun Control) Joe continues to blame guns, and propose ‘solutions’ that will only affect law-abiding gun owners.”

The National Rifle Association’s lobbying arm accused Biden, sinking in the polls, of pandering to the anti-gun crowd.

“This rule is an important step,” Biden said. “It’s going to make a difference, I promise you. And a lot of other things we know work to reduce gun violence and other violent crimes and save lives. That’s why I put together a comprehensive strategy to supercharge what works. I’ll continue to push Congress to act on sensible legislation to prevent gun violence.”

Biden said in addition to the regulation of “ghost guns,” he’s “working” in the following four areas:

“First, we’re going after rogue gun dealers…We’re cracking down on these gun dealers and the violent criminals they knowingly arm.”

“Right now, you get let out of prison after serving your time, you get a bus ticket and 25 bucks,” Biden said. “You end up under the same bridge you left two, five, ten years earlier.

“If you serve your time, you qualify for a Pell Grant, you qualify for housing, you’re qualified for food. You qualify to get back into the community, give them a fighting chance. These are all demonstrated ways to reduce crime.”

Biden “strongly” urged cities, states, counties, and tribes to “use the Rescue Plan funding we sent them to do more in each of these areas.”

Biden also repeated his call for Congress to pass “universal background checks” and a ban on “assault weapons.” And he wants Congress to strip gun manufacturers of their immunity from most lawsuits.

“It’s no wonder the anti-gun crowd appears to be growing more and more disillusioned with Biden,” the NRA wrote.

“Ultimately, all the White House has done is repeat what it has said previously, as well as try to claim that progress has been made. It talks, yet again, about so-called ‘ghost guns,’ and encourages anti-gun members of Congress to pass legislation to mandate ‘universal’ background checks, ban semi-automatic firearms and their standard capacity magazines, and allow for the firearms industry to be sued into oblivion through meritless lawsuits.”

The NRA concluded its response to Biden’s remarks this way: