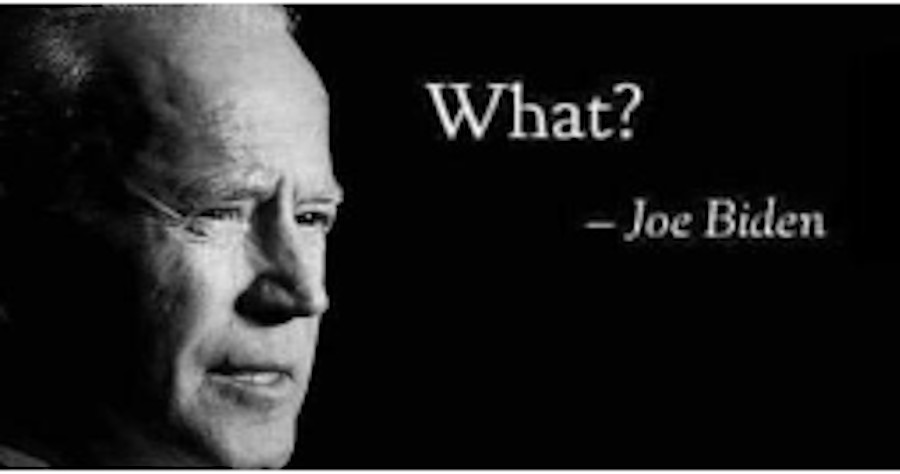 Last week we joked that in its relentless crusade to do the impossible and put a cap on oil (and/or gas) prices, “every day the White House proposes some increasingly more ridiculous and desperate “solution” to high gas prices”, as follows: Wednesday: windfall tax; Thursday: oil fuel export limits; Friday: rebate cards…

Then just in case the list of proposals wasn’t ridiculous enough, the past 24 hours brought two new, and even more idiotic proposals from the administration where the 79-year-old teleprompter reader can’t even ride a bicycle:

First, on Monday, President Biden – who probably was not riding a bicycle at the time – said that he was considering seeking a gas tax holiday to ease high fuel prices: “I hope I have a decision based on the data I’m looking for by the end of the week,” the president told reporters in Delaware. Needless to say, even if Congress were to pass the needed legislation, the impact on gas prices would be minimal as the Federal gas tax is only 18.4 cents per gallon, and the bulk of taxation is at the state level.

Second, and just when you thought it couldn’t get any dumber, Janet Yellen (who together with Jay Powell, will soon be thrown under the hyperinflationay bus to take the fall for the economic devastation unleashed by the Biden admin) said talks are continuing on how the US and its allies “might cap the price of Russian oil exports, possibly through a plan that offers exceptions to the European ban on insuring Russian oil shipments.”

“We are continuing to have productive conversations, today and with our partners and allies around the world with how to further restrict energy revenues to Russia while preventing spillover effects to the global economy,” Yellen said during a press conference in Toronto alongside Canadian Finance Minister Chrystia Freeland.

“We are talking about price caps or a price exception that would enhance and strengthen recent and proposed energy restrictions by Europe, the United States, the UK and others,” she said.

Word salad aside – because while most western countries have banned imports of Russian oil while the European Union has agreed to prohibit seaborne imports of Russian crude in six months, India and China are importing more Russian oil than ever and adding billions to Russia’s treasury every single day, helping push the Russian ruble to the highest level in almost a decade – there is zero chance of any “price caps” being successfully implemented.

We know this because Italy, that most clueless of European sovereigns decided to also chime in.

On Tuesday, Energy Minister Roberto Cingolani said that an Italian proposal to cap natural gas prices in Europe is gaining traction across the region as countries increasingly see it as the “only solution” to soaring costs.  Italy has recommended that European Union member states put a limit on the price of gas imports from Russia to help curb inflation in the bloc, but nations including Germany have shown skepticism.

Truly a brilliant idea… until we read the following quote making it clear just how “competent” Italy is in its comprehension of how the energy markets works: “Gas prices are rising not for a physical reason,” Cingolani said at a conference in Rome. “The price is rising just because someone somewhere from a keyboard has decided so.”

There’s more: Imposing a price cap “seems to be the only sustainable solution,” Cingolani said. Such a move would avoid the risk that “someone, waking up some morning, could put forward a crazy gas-price level.”

Of course, we can only imagine that Cingolani wasn’t around the last time price caps were attempted. Let’s just say the outcome was…. suboptimal.

This relentless barrage of idiocy has made two things clear: i) Western governments are powerless to do anything to lower oil prices, assuring the Kremlin’s windfall extends indefinitely; ii) the stupidity will only accelerate indefinitely.

Realizing that both Europe and the US are now in the “let’s throw any old shit at the wall and hope it sticks” phase, someone somewhere with a keyboard decided to push the buy button, and oil – which tumbled on Friday amid fears that a created by “serious people” was imminent – jumped higher….

…. and we are confident it will recover all recent losses in the next few hours, not least of all because as Bloomberg’s chief energy reporter Javier Blas notes, refined products (diesel, above all) are already leading the recovery from Friday’s sell-off, with US WTI 3-2-1 refining margins surges above $61 a barrel, flirting with a new all-time high as “Already US refiners are running their plants, particularly in GoM, at very high rates.”

OIL MARKET: Refined products (diesel, above all) leading the recovery from Friday’s sell-off. US WTI 3-2-1 refining margins surges above $61 a barrel, flirting with a new all-time high. Already US refiners are running their plants, particularly in GoM, at very high rates | #OOTT pic.twitter.com/XZuFAT3yfP

So is the Biden admin doomed and is there nothing it can do to ease gas prices? Well, there is one thing it could do… only on Monday Yellen rejected the idea that restarting the Keystone XL pipeline project would help increase supplies of oil and lower prices because it would take years to accomplish:

“I don’t see it as a short-term measure to address the current situation, and longer-term we remain committed to our climate change objectives, but, you know, it’s really up to the president to consider,” she said.

Biden, who campaigned on an ambitious climate platform, canceled the Keystone XL pipeline — which would run between the US and Canada — hours after taking office, after a record “81 million Americans voted for him”. The project was under construction when Biden revoked its presidential permit. It would have transported more than 800,000 barrels of oil a day.