On The Run: Parents of Michigan Shooter Flee After Being Charged with Involuntary Manslaughter [VIDEO] 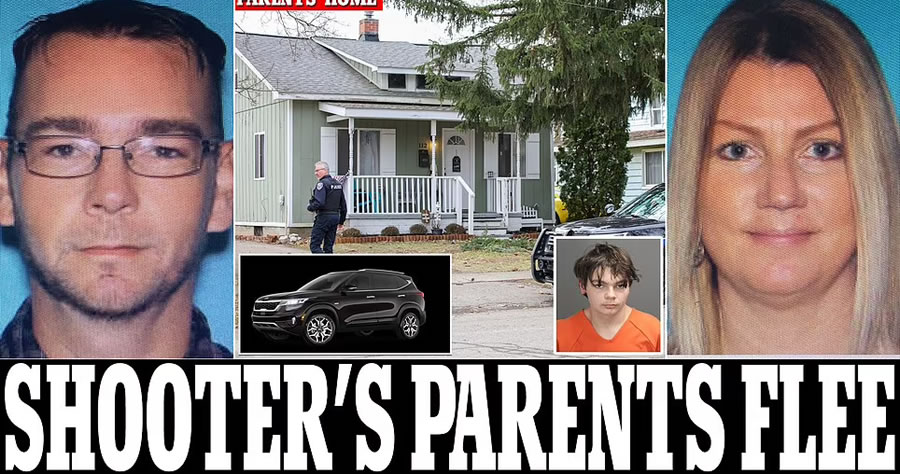 Michigan cops are searching for the parents of Ethan Crumbley, the Michigan teen who killed four people on Tuesday and injured another seven when he shot up Oxford High School, according to the Detroit News.
Jennifer and Jason Crumbley were charged with four counts each of involuntary manslaughter on Friday, a rare move by prosecutors who said the parents failed to secure their guns and didn’t respond to their son’s distressing behavior.

The Detroit News reported that despite previously promising to show up if a warrant was put out for their arrest, the couple is not responding to messages from their attorney and can’t be found.
Now, they’re being chased down by the Oakland County Fugitive Apprehension Team

“Our last conversation with the attorney was that she had been trying to reach them by phone and text, and they were not responding,” Oakland County Undersheriff Mike McCabe said.

Oakland County Sheriff Michael Bouchard warned the parents that they won’t be able to hide from the cops.

“If they think they are going to get away, they are not,” Bouchard told CNN.

Bouchard said it’s possible the couple is armed, and his team is working with the FBI and the U.S. Marshals to track them down. He admitted to CNN the parents weren’t under surveillance until late last night and couldn’t say when his department last saw the two.

“Gun ownership is a right, and with that right comes great responsibility,” she says https://t.co/CP3UGp6u0B pic.twitter.com/Xhc4glk5N6

Parents of Michigan shooter Ethan Crumbley, 15, go on the RUN after being charged with manslaughter https://t.co/B5yVEou13b pic.twitter.com/2YCeh88RWx

Less than a week before the gun was purchased, on November 21, McDonald said a teacher at Oxford High School observed Ethan searching ammunition on his cell during class and reported it to school officials.

Jennifer was contacted via voicemail by the school about her son’s inappropriate internet search, and officials followed up with an email but received no response, the prosecutor said.

The mother later exchanged texts with her son on that day stating: ‘lol, I’m not mad at you, you have to learn not to get caught,’ McDonald said Friday.

She also revealed that on the morning of the shooting, a teacher found a chilling note on Ethan’s desk, which featured disturbing drawings depicting a semi-automatic gun, a bullet, a shooting victim and a laughing emoji.

According to the prosecutor, the note included the words ‘blood everywhere,’ ‘thoughts won’t stop, help me,’ ‘my life is useless’ and ‘the world is dead.’