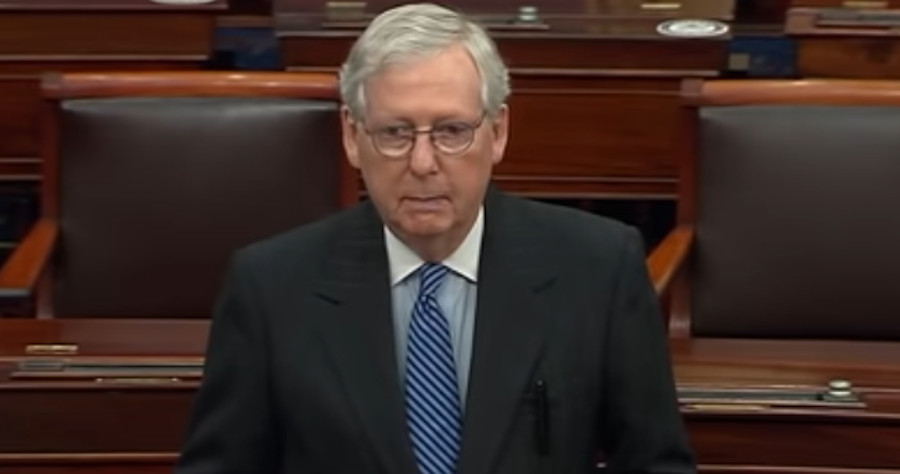 Sen. Mitch McConnell (R-KY) is claiming that “we all agree the most important thing going on in the world right now is the war in Ukraine.

He made the comments after meeting with President-imposed Joe Biden in which the globalists plotted the best way to send billions and billions more to Ukraine to keep their proxy war with Russia going even if it means risking World War 3.

“I think we all agree the most important thing going on in the world right now is the war in Ukraine,” McConnell said to reporters.

“I had a chance to call the president last week and request that the Ukraine package move by itself and quickly. He said, let me think it over. He called back in about 15 minutes and agreed that we need to do this for Ukraine only, and quickly,” he continued.

“I think we’re on a path to getting that done, discussions are underway between the House and Senate appropriators on the crafting of the package,” McConnell added. “It needs to be clean of extraneous matters, directly related to helping Ukrainians win the war.”

McConnell’s comments can be seen here:

.@LeaderMcConnell“: “I had a chance to call the president last week and request that the Ukraine package more by itself and quickly…He called back in about 15 minutes and agreed…I think we’re on a path to getting that done.” pic.twitter.com/0C8rc8IyJQ

Big League Politics has reported on how the globalists have propped up the fake puppet regime in Ukraine, wasting more blood and treasure while doing so:

“Not too long after the globalist-backed color revolution coup installed a new regime in Ukraine, the government brought on Rothschild as an advisor to strengthen their ties with the international financial system.

Ukraine brought Rothschild on board to their finance ministry in 2017 at the same time they had Citi, Goldman Sachs and JPMorgan handle their bonds. It is said Rothschild was hired to “manage medium-term debt liabilities.”

After the coup took place, Ukraine was immediately put on the dole of the International Monetary Fund (IMF). They took $8.4 billion from the IMF in 2014, supposedly to help their economy recover from a recession, but in all likelihood, it was actually a globalist payout to the new coup government for a job well done.

Amidst the Ukraine/Russia conflict, the IMF and their partners at the World Bank are once again papering over the Ukraine coup government with major cash. They are preparing a $3 billion aid package to Ukraine to keep their government propped up as NATO expansion becomes more of a possibility.

“At the World Bank Group, we are preparing a $3 billion package of support in the coming months, starting with a fast-disbursing budget support operation for at least $350 million that will be submitted to the Board for approval this week, followed by $200 million in fast-disbursing support for health and education,” the globalist institutions announced.

“This package will include the mobilization of financing from several development partners, and we welcome the already-announced support from many bilateral partners,” they added.”

The U.S. Senate can only unite around “America Last” priorities. They will all happily send money out the door to benefit the military-industrial complex, but not to help the American people and keep them safe.