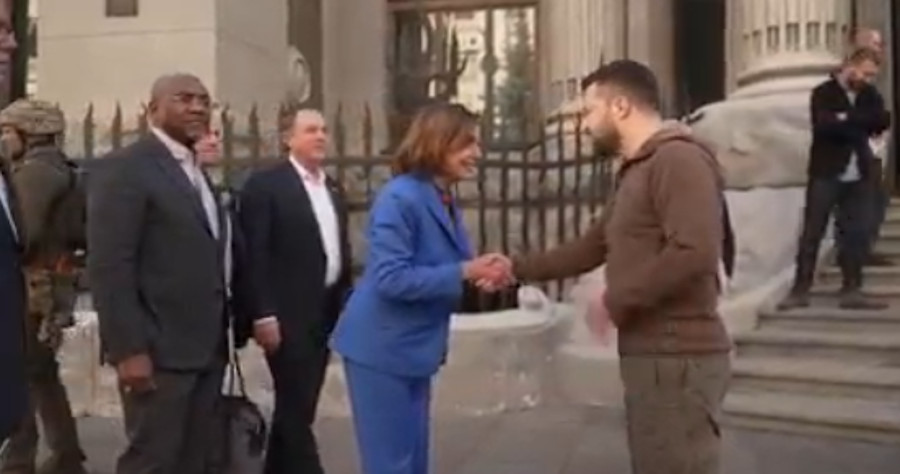 House Speaker Nancy Pelosi led the first official delegation of lawmakers to Ukraine and became the most senior United States official to meet with President Volodymyr Zelensky since Russia invaded on Feb. 24, according to a statement released Sunday.

“We believe that we are visiting you to say thank you for your fight for freedom, that we are on a frontier of freedom, and that your fight is a fight for everyone and so our commitment is to be there for you until the fight is done,” Pelosi said Saturday night during the meeting, a video posted by Zelensky shows.

Zelensky said in a statement after the meeting in Kyiv that the United States is “the leader of the powerful support of Ukraine in the fight against the aggression of Russia.”

“Thank you for helping to protect the sovereignty and territorial integrity of our state!” Zelensky said.

“Our Congressional Delegation had the solemn opportunity and extraordinary honor of meeting with Ukrainian President Volodymyr Zelenskyy and other top Ukrainian officials in Kyiv,” Pelosi said in a statement Sunday after the unannounced trip.

Pelosi said that Zelensky “conveyed the clear need” for continued assistance from the United States “to address the devastating human toll taken on the Ukrainian people by Putin’s diabolic invasion.” She said that she told the Ukrainian president that more assistance would come soon.

“Our delegation conveyed our respect and gratitude to President Zelensky for his leadership and our admiration of the Ukrainian people for their courage in the fight against Russia’s oppression,” Pelosi said.

Pelosi said that the delegation will meet with President Andrzej Duda and senior officials in Warsaw, Poland.

“We look forward to thanking our Polish allies for their dedication and humanitarian efforts,” Pelosi said. “We will proudly convey the gratitude of America for the work of U.S. service members and diplomats and other civilian leaders in Poland.”

Pelosi’s delegation, made entirely of Democratic lawmakers, came weeks after House Minority Leader Kevin McCarthy, R-Calif., led a bipartisan group of lawmakers to Warsaw to meet with the prime minister of Poland and officials from Ukraine to discuss the ongoing war.

McCarthy was joined on the trip by Republican Whip Steve Scalise and six other Republicans, as well as Democratic representatives Kathleen Rice of New York and Stephanie Murphy of Florida.

Sen. Amy Klobuchar, D-Minn., also visited Poland in March with a bipartisan group of senators and met with Ukrainian refugees and aid workers near the border.