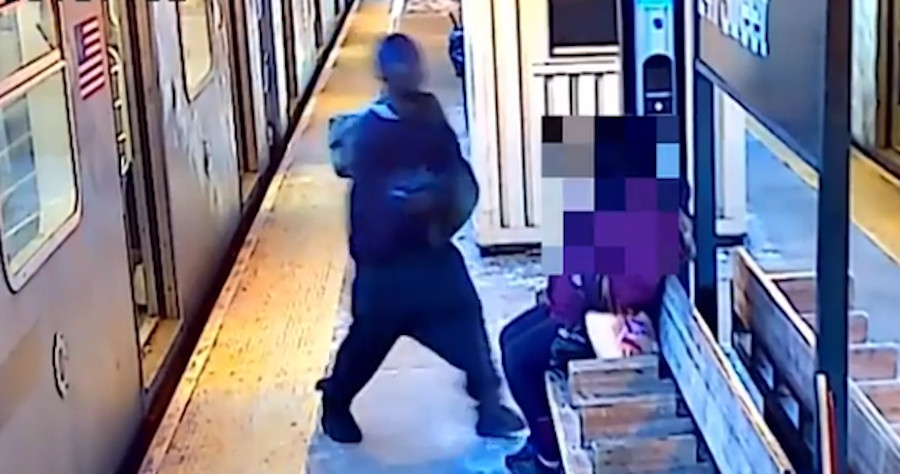 The sicko who allegedly smashed his own feces in a Bronx straphanger’s face joked with cops that “s–t happens” before sneering to a Bronx judge, “F–k you, bitch.”

Frank Abrokwa, 37, was busted Monday at his homeless shelter in connection to the revolting Feb. 21 attack, according to cops and police sources.

Upon arrest, he made light of the attack, quipping to cops, “S–t happens. Haha. This is a s–tty situation. Haha,” Bronx Assistant District Attorney Grace Phillips said during Abrokwa’s arraignment late Tuesday.

Abrokwa — apparently impatient because Brooklyn detectives showed up to arrest him for an unrelated hate crime from September — also made a scene in Bronx Criminal Court.

Prior to his appearance before Judge Wanda Licitra, he could be heard in the holding area grumbling, “Why am I still here? I’m f–king tired of it. I’m hungry.”

Then he appeared in the courtroom wearing a baseball hat with “USA” emblazoned on it, and a silk track jacket with covers of hip-hop magazines printed on it.

Phillips requested an order of protection for the 43-year-old feces victim — prompting an outburst from Abrokwa, who told the judge, “I don’t know that b—h,” referring to the victim.

“Can I go with the Brooklyn detectives?” he pleaded.

He then lashed out at the judge, lamenting, “Why am I being mistreated by the system?”

“I’m being respectful. I’m talking to my attorney,” he snapped at the jurist. “You’re talking to her. Not to me. F–k you, bitch.”

At that point, Licitra called the case and had Abrokwa removed from the courtroom — but brought him back in later to continue the arraignment, which lasted about 40 minutes.

Ultimately, Abrokwa was freed without bail — because the charges against him were not bail-eligible under the state’s bail reform laws, despite prosecutors’ request for him to be held on $15,000 bond, or $5,000 cash.

Horrifying video of the attack shows Abrokwa allegedly slapping a bag filled with his own crap in the victim’s face — and then rubbing it on the back of her head — as she sat on a bench at the Wakefield-241st Street subway station.

Just before the attack, Abrokwa approached the victim and said, “Hey mami, how come you don’t want to talk to me?,” Phillips said.

“The complainant did not engage with the defendant,” the ADA said. “Instead of taking the lack of engagement in stride, the defendant responded with violence. He walked into a nearby idling subway car and defecated in a bag.”

“He then walked back to the complainant and repeatedly smashed the bag and left his feces in her face, head, neck, shoulders and back area. She had feces in her eyes, and hair. As he attacked, the defendant stated in sum and substance: ‘Like this, bitch?’”

The victim used her bag to shield herself but suffered a small bleeding cut inside her lip, and a swollen and red forehead, Phillips said.

But just after being freed in the Bronx, Abrokwa was nabbed in connection to the Brooklyn hate crime.

In that case, Abrokwa approached a 46-year-old man on Utica Avenue near Park Place in Crown Heights around 5:30 p.m. Sept. 9 and snarled, “F–king Jew, I’m going to kill you,” cops said.

He then spat on the victim’s chest and tried to punch him, but missed, before fleeing, according to cops and police sources.

Abrokwa was charged with harassment and menacing, both as hate crimes, police said. His arraignment was pending Wednesday morning.

Abrokwa has 22 prior unsealed arrests dating back to 1999, and dozens of sealed arrests, according to authorities and police sources.

The busts include a Feb. 5 assault, when he slugged a Greyhound bus driver in the face at the Port Authority Bus Terminal, according to a criminal complaint and police sources.