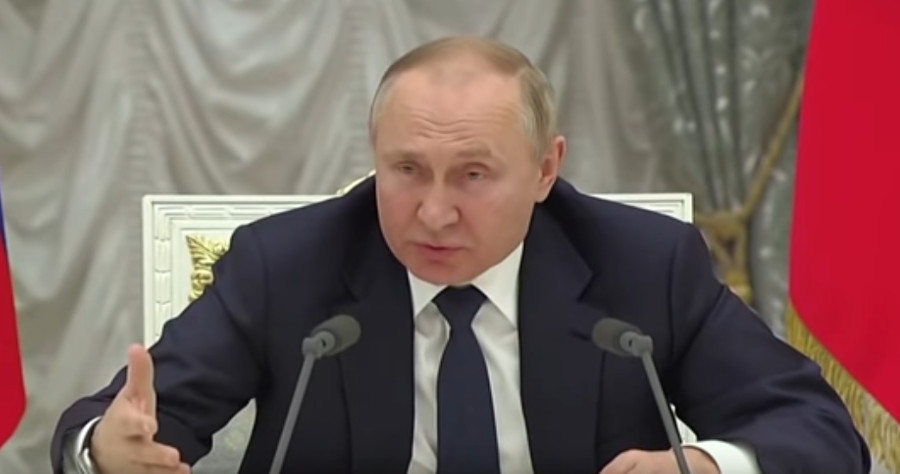 Billionaire pals of Vladimir Putin, including a pair swept up in phony claims of 2016 Trump-Russia collusion, are calling for peace in Ukraine as sweeping U.S. and international sanctions in reaction to Russia’s invasion threaten their fortunes.

Mikhail Fridman, a co-founder of Russia’s Alfa Bank, which was the subject of debunked claims of a secret backchannel to the Trump Organization during the 2016 presidential election, has voiced objections to Putin’s war against the neighboring country. Now, Oleg Deripaska, known for his prior business relationships with former Trump campaign manager Paul Manafort and British ex-spy Christopher Steele and accused of assisting the Russian government’s influence operations worldwide, has piped up for peace as well.

Deripaska said on his Telegram page over the weekend, “Peace is very important! Negotiations need to start as soon as possible!”

Fridman was even more direct — and personal.

“I was born in Western Ukraine and lived there until I was 17. My parents are Ukrainian citizens and live in Lviv, my favorite city,” Fridman wrote in a weekend email to staff at his U.K. equity firm LetterOne, according to the Financial Times. “But I have also spent much of my life as a citizen of Russia, building and growing businesses. I am deeply attached to Ukrainian and Russian peoples and see the current conflict as a tragedy for them both.”

Fridman continued, warning that the war is splitting countries with common bonds.

“I do not make political statements, I am a businessman with responsibilities to my many thousands of employees in Russia and Ukraine,” Fridman wrote. “I am convinced however that war can never be the answer. This crisis will cost lives and damage two nations who have been brothers for hundreds of years. … While a solution seems frighteningly far off, I can only join those whose fervent desire is for the bloodshed to end.”

Fridman is worth $13.4 billion according to Forbes, with Deripaska worth $3.9 billion. The outlet reported last week that Russia’s more than 100 billionaires had lost more than $126 billion since mid-February, including $71 billion lost on Thursday alone.

Alfa Bank was sanctioned by the Biden administration on Thursday as part of sweeping U.S. financial sanctions against Russia.

Michael Sussmann, a Democratic cybersecurity lawyer, was indicted last year by special counsel John Durham for allegedly concealing his clients, including Hillary Clinton’s campaign, from the FBI in September 2016 when he pushed debunked claims of a secret backchannel between the bank and Trump. The bank has consistently denied the collusion allegations.

Special counsel Robert Mueller, DOJ Inspector General Michael Horowitz, and congressional investigations did not uncover any evidence that the backchannel claims were true.

The European Union is also reportedly discussing sanctioning Russian oligarchs such as Fridman and his Alfa Bank co-founder, Petyr Aven. The Kremlin’s spokesperson said in May 2018 that Fridman and Aven “are by no means Putin envoys.” Russia’s state-run TASS said more than three dozen representatives of Russia’s business community met with Putin on Thursday, including Aven.

The Mueller report stated in 2019 that Aven “told the Office that he is one of approximately 50 wealthy Russian businessmen who regularly meet with Putin in the Kremlin.” The report said Aven claimed he met with Putin in late 2016, that Putin warned him about sanctions against Alfa Bank and said the Russian government was having trouble getting in touch with the incoming Trump administration.

Claims that Alfa Bank worked with Trump before the 2016 election were front and center in the campaign and efforts to smear Trump that were later discredited.

In the closing days of the race, Hillary Clinton tweeted about Alfa Bank: “Computer scientists have apparently uncovered a covert server linking the Trump Organization to a Russian-based bank.” She also shared a lengthy statement from Jake Sullivan, previously one of her top advisers and now Biden’s national security adviser, who said that “we can only assume that federal authorities will now explore this direct connection between Trump and Russia.”

Biden finally allowed congressionally mandated sanctions against the company behind the Kremlin-funded Nord Stream 2 pipeline to move forward last week. Fridman reportedly has a multibillion-dollar investment in a German company that itself invested in Nord Stream 2.

Deripaska reportedly said as recently as Feb. 21 that there would not be a war in Ukraine.

Steele was working for Deripaska before, during, and after his time targeting then-candidate Trump, and the former MI6 agent was hired to put the dossier together by an opposition research firm, Fusion GPS, which was hired by the Clinton campaign.

Deripaska paid Steele to investigate Manafort after accusing the Republican operative of stealing millions from him, and Steele sought help from Fusion in early 2016. The firm soon hired Steele to conduct anti-Trump research.

A Washington, D.C., mansion tied to Deripaska was raided by the FBI in October.

The Senate Intelligence Committee’s report in 2020 found “the Russian government coordinates with and directs Deripaska on many of his influence operations” around the world.

Deripaska was sanctioned by the Treasury Department in 2018, which said he had been investigated for money laundering, bribery, and a host of other crimes.

Other Russian businessmen, journalists, and entertainers have also spoken out against Russia’s invasion, and hundreds of people have been arrested during protests.

An anonymous Moscow billionaire told Reuters that the war “is going to be catastrophic in all senses: for the economy, for relations with the rest of the world, for the political situation.”

Russian billionaire Roman Abramovich, the owner of the Chelsea soccer team, announced over the weekend that he was giving the trustees of Chelsea’s charitable foundation “the stewardship and care” of the team. Abramovich claimed on Monday that he was helping with Russia-Ukraine peace talks at the request of the Ukrainians.

Abramovich’s girlfriend famously gave birth to their child in New York City in 2013 as he parked his megayacht in Manhattan.

A senior U.S. defense official vowed over the weekend that “we will launch a multilateral transatlantic task force to identify, hunt down, and freeze the assets of sanctioned Russian companies and oligarchs — their yachts, their mansions, and any ill-gotten gains that we can find and freeze under the law.”