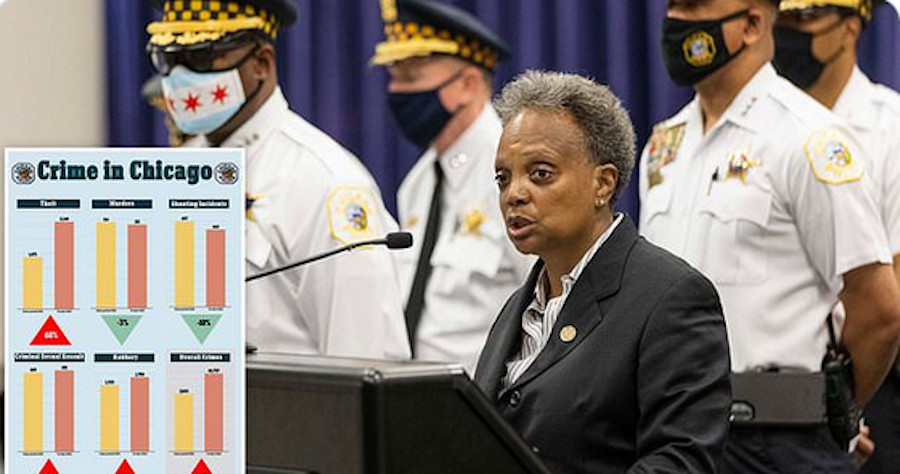 Ahhh. To be the king. Or queen. Or hard-left mayor of a major American city that is descending into criminal chaos while you enjoy your taxpayer-funded security detail of 91 police officers.

Yes, “progressive” Chicago Mayor Lori Lightfoot does indeed enjoy sleeping peacefully at night in her mansion, safe in the knowledge that the city’s elite officers are protecting her and her wife.

The previously unknown Chicago Police Department Unit 544 has 65 officers along with five sergeants and a lieutenant assigned to protect the mayor — on top of her personal bodyguard detail of about 20 officers, the Chicago Sun-Times reported this week. That’s an awful lot of police presence for a Democrat who feels the pain of rioters and looters.

The unit, also called the Government Security Detail, told potential recruits that its “mission will be to provide physical security for City Hall, the mayor’s residence and the mayor’s detail command post,” the paper said. A recruitment memo reportedly stated:

“Through the coordination of intelligence and resources, officers will respond to all threats related to the mayor’s physical properties to ensure its protection.”

The memo was sent in July 2020, the year that Lightfoot pushed to slash the police department’s budget by $80 million, axing hundreds of jobs, amid growing calls to defund the police during protests over the death of George Floyd in Minneapolis. Chicago’s mayor has long been an open advocate for defunding the police and has criticized American policing as being rife with racism.

The proposed budget cuts were too radical for even Chicago Democrats, and the budget cut was reduced to $59 million.

But in 2020 alone, Lightfoot quietly cut 400 officers from the city’s police force in the name of defunding the police and racial justice. In 2021, 660 Chicago police officers elected to retire.

Critics said that the secretive police unit was hired at a time of rising complaints over the dwindling presence of patrol officers — ironically partly due to patrols keeping “defund the police” protesters away from Lightfoot’s house in Logan Square, the Sun-Times noted.

“While murders are soaring, while districts are barebones for manpower, all that matters is protecting her castle.”

Lightfoot confirmed the existence of Unit 544, insisting it was created to cover for the lack of a “unified command” for potential mayoral emergencies. She told the Sun-Times:

“And then obviously, in 2020 in particular, there were a significant amount of protests all over the city, and some of them targeted at my house. All the more reason why having a unified command to understand and share intelligence and be ready to respond if there was any kind of threat was very important.”