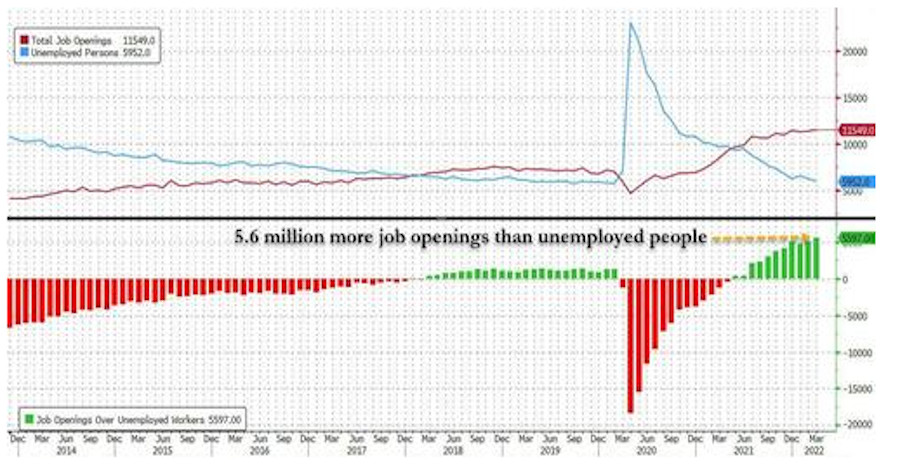 Another month, another blockbuster JOLTS report confirming just how terribly broken the US labor market is.

Last month, the BLS reported that the US job market was plagued by a near record 11.27 million job openings. Then moments ago, the BLS published its latest, March JOLTS report according to which job openings just hit a new all time high 11.549 million, blowing away expectations of 11.2 million, up 205K from February and up 100K from the previous record high of 11.448 million hit in December of 2021.

In other words, of this moment – when US GDP is already negative – there still is a record number of job openings in the US job market, a phenomenon which Jeff Gundlach recently attributed to the surging “crime-force participation rate“, claiming that lack of prosecution has made millions of potential workers into hardened shoplifting criminals.

Gundlach on lack of workers: “the crime-force participation rate has taken away some of those workers.”

What we find far more remarkable, however, is that amid the continued tightening in the labor market, there was a new record, or 5.6 million more vacant jobs than unemployed workers in March, confirming that the US labor market remains woefully, perhaps irreparably cracked, and the wage-price spiral is all too reak.

And while the number of job openings rose again, this was offset by a curious decline in the number of hires, which dropped from 6.832MM to 6.737MM in March.

One last observation comes from the February quits rate: after the number of Americans quitting their job hit an all time high 4.510 million in November, it then dropped modestly for a few months in a row, but then reversed sharply higher again in February and March, rising by 284K in the two months and increasing to a record 4.536 million, which confirms that once again, more Americans than ever are willing to take their chances and quit their job in hopes of finding higher pay elsewhere.