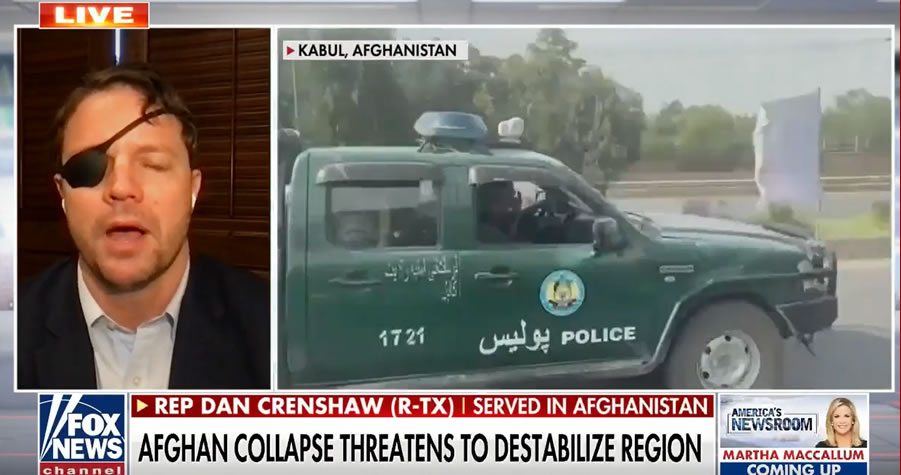 Crenshaw described Biden as “utterly incompetent” in how he handled Afghanistan, which he said is the opposite of the previous president, Donald Trump. He added that the “State Department really botched this” and the “Secretary of State owes the American people a lot of explanations.”

“They didn’t like how it would look to abandon Kabul before Bagram,” he said when asked why it was handled that way. “And here’s another thing the State Department never did: They never even built a contingency plan to take people out of the embassy. They were planning on just staying even though conditions on the ground were getting worse and worse. … By Saturday they had no plans to leave. This is what we’re hearing from insiders. The Secretary of State owes the American people a lot of explanations for this. Of course, the buck stops with Biden. Biden made all of these decisions, and it’s reprehensible, but the State Department really botched this.”

Wendy Sherman has failed over and over. She is the worst negotiator for the U.S.

Her voice is now shaking. She is reading a script.

She gives Americans ZERO hope that the US government has a stable policy. @DeputySecState

Wendy Sherman has been out negotiated by the North Koreans and the Iranians.

She has failed us again. @DeputySecState

Wendy Sherman should never have been confirmed for @DeputySecState.

Only in Washington, DC do you get to fail up.

Oh great….Wendy Sherman is reading a list of meetings that they’ve scheduled.

She’s proud that the UN made a statement.