Rep. Kevin Hern: ‘The American People Don’t Believe That Inflation Is Only 8% … Everything Is Up Double Digit’ 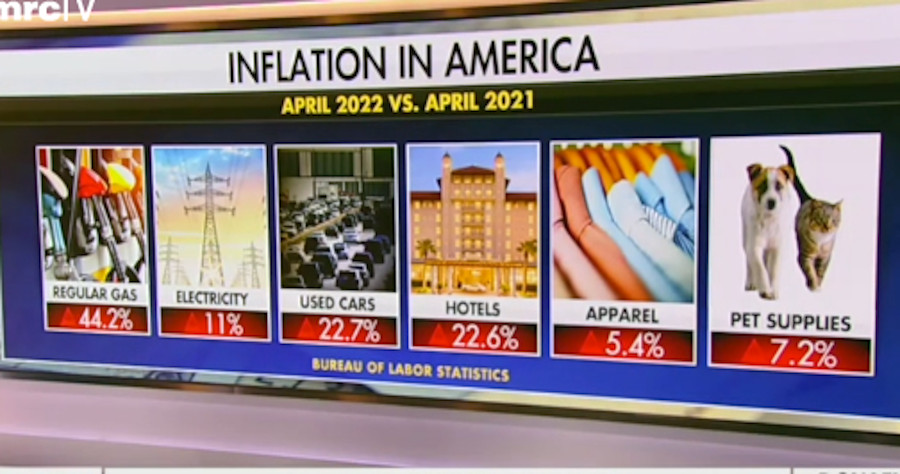 Inflation is up 8.6 percent, according to the Consumer Price Index for All Urban Consumers (CPI-U), but the American people believe it’s much higher, because everything is up double digits, Rep. Kevin Hern (R-Okla.) told Fox Business’ “Mornings with Maria Bartiromo” on Friday.

As CNSNews.com reported, over the last 12 months, the all items index increased 8.6 percent before seasonal adjustment, compared with 8.3 percent in April and 8.5 percent in March. That 8.6 percent increase is the largest since December 1981.

Add increased housing costs and real inflation is well over 10%

“First of all, the American people don’t believe that inflation is only 8% as you’ve said this morning on your show. Everything is up double digit. Gas has doubled already. It’s almost $5 a gallon nationwide, as you’ve listed all of the different commodities out there, how high they are. The American people are feeling much higher, I expect 8.3 or higher as we see today,” Hern said.

“The president is doing all of the gimmicks to do things, releasing a million barrels a day, oil that we put in petroleum reserve at $50 a barrel and we’ll have to replace $150 a barrel. I mean, just economic disaster after disaster. Now he’s talking about removing tariffs in China. He wants to go easing on China now to bury the idea that he caused anything to do with inflation,” the congressman said.

“This president and the administration have got to get spending under control. I just released a budget yesterday, the first budget, it’s been done this year. We did the budget last year as well and the Republican Study Committee that Chairman Jim Banks leads, and, you know, it’s the only responsible budget that we’ve seen in the four years that I have been in Congress,” he said.

The congressman said Treasury Secretary Janet Yellen is right that we have a supply and demand issue, but we gotta to ask why it started, and her predecessor Lawrence Summers said that it was because of the $2 trillion spending that they initiated when they got in office last year, and she admitted finally, last month that she had gotten it wrong, and she’s talking about competition being eliminated.”

“Her tax policies that she’s doing right now is doing nothing but wanting our multi-national companies, our largest companies to go elsewhere to do business. She just stopped a 100-year credit for foreign tax for our multi-nationals to do business abroad, and now they are looking at places like China to go do business and, you know, this administration time and time again has said one thing and done another. Their video and their audio are not matching up,” he said.

“She’s going after these oil and gas companies – she and the president – and then when asked in the ways and means hearing this week about it, she said, you know, it’s a global issue. Which is it? Is it a U.S. domestic issue or is it a global issue? They hope that nobody is listening, and they continue to do things they’re doing just as they’ve done since they’ve gotten into office,” Hern added.

Hern, who serves on the House Ways and Means Committee, said that his budget “balances in seven years, and it also protects our southern border.”

“It strengthens our military by meeting the inflation numbers and having a real 5% growth. I mean, we are competing with China who is building a brand-new Navy who now has their space station up and running independent of ours. They’re wanting to own the entire sphere of space,” he said.

“They’re working very passionately to control us economically, and we’re not doing anything about it and, you know, then this president is depending upon places like Iran and Venezuela for oil when we have the oil and gas we need right now to curtail this inflation that we are seeing,” the congressman said.

Hern said that President Biden “likes to go to Jimmy Kimmel and talk on shows like that about how Republicans are terrible, but I assure you one thing about Republicans.

“We want to secure the sovereignty of this nation by closing our southern border as we did under President Trump. We need to recognize that fentanyl is the number one killer of adults 18 to 35 years old, and we don’t see a prime time event talking about that,” the congressman said.

“We don’t see a prime time event talking about the direction of our economy by China and doing things, and what we’re seeing right now is the president trying to do stuff like raise $500– $50 billion rather to bring chip making back to this country so the American taxpayers are going to pay for this failed policies that the president has done, whether it’s energy policy, a southern border policy, a fentanyl policy. Every one of these have been a failure for him,” he said.