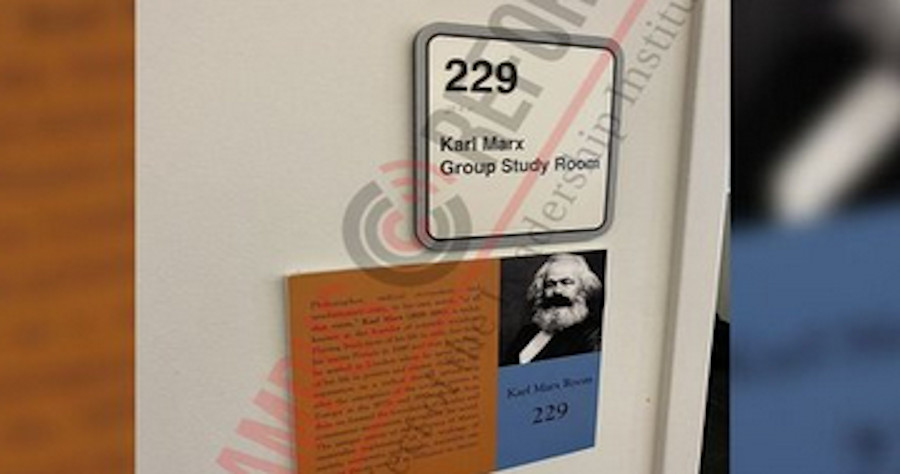 A Florida university has renamed a group study room on campus after socialist revolutionary Karl Marx, who is also known as the Father of Communism.

The Karl Marx Group Study Room at the University of Florida is one of 14 other reserved spaces where students can schedule a time to collaborate.

An inscription labels Marx as a ‘philosopher, radical economist, and revolutionary critic.’@alexaschwerha1https://t.co/30MFcGwHiH

The report noted that a plaque is also beneath the room sign:

“In a picture obtained by Campus Reform, Marx’s name can be seen on a plaque labeling the space in Library West a ‘Group Study Room.’

“A small inscription labels Marx as a ‘philosopher, radical economist, and revolutionary critic.’

“Library West is part of the George A. Smathers Libraries system.

“The description credits Marx as being the ‘founder of scientific socialism’ whose ‘reputation as a radical thinker’ emerged during the rise of the socialist political parties in the 1870s and 1880s.
“‘The unique extent of the influence of Marx’s materialist explanation of the workings of society, economics and history, inevitably saw Marxist theory extend its influence to literary criticism,’ the plaque reads.

“Marx is also credited with laying the foundation for the rise of ‘socialist and communist movements throughout the world.’”

I made the decision long ago that UF will NEVER get another dime of our money. We’ll continue to work with the State and Governor’s Office to defund the very essence of this state funded organization.

GatorNation or Communist Party? Which is it?https://t.co/n8eJSYF90o

According to the report, the renamed study room is one of 14 areas where students can reserve a space in order to collaborate with each other:

“The rooms vary in capacity ranging from groups of two to teams of 12. The Karl Marx room holds the largest occupancy.

“Each room honors the name of influential individuals who have impacted a wide range of academia including literature, politics, philosophy, and science.

“Anthropologist Margaret Mead is also featured.”
The University of Florida notes on its website that it is “committed to challenging convention” and its campus community:

“At the University of Florida, we are a people of purpose. We’re committed to challenging convention and ourselves.

“We see things not as they are, but as they could be. And we strive for a greater impact: one measured in people helped and lives improved.”

However, many believe that it is not helpful to promote a man whose ideologies resulted in the deaths of millions around the world.

Marx wrote “Manifesto of the Communist Party” with Frederick Engels, and it was published in February of 1848.
The book’s opening included:

“A spectre is haunting Europe – the spectre of communism. All the powers of old Europe have entered into a holy alliance to exorcise this spectre: Pope and Tsar, Metternich and Guizot, French Radicals and German police-spies.

“Two things result from this fact:

“I. Communism is already acknowledged by all European powers to be itself a power.

“II. It is high time that Communists should openly, in the face of the whole world, publish their views, their aims, their tendencies, and meet this nursery tale of the Spectre of Communism with a manifesto of the party itself.

“To this end, Communists of various nationalities have assembled in London and sketched the following manifesto, to be published in the English, French, German, Italian, Flemish and Danish languages.”

Karl Marx was a complainer, not a visionary. https://t.co/sKQRLMZRB9