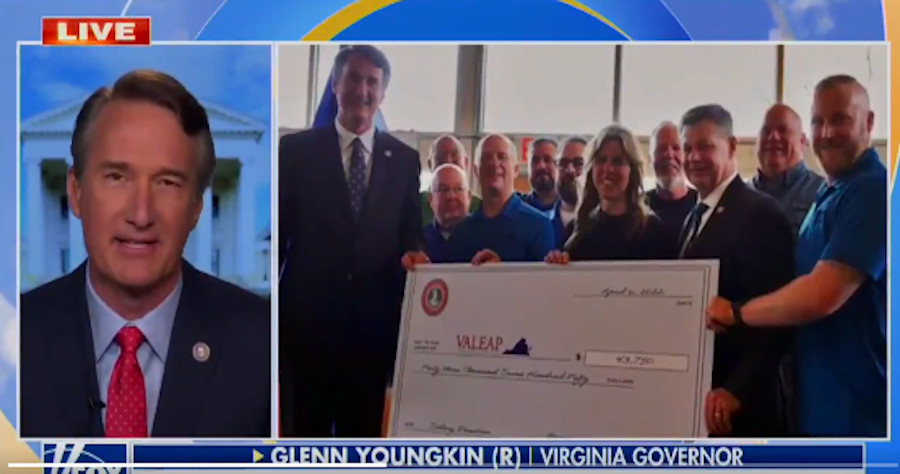 According to a report from Fox News, Republican Governor Glenn Youngkin, has announced that he will be donating his first quarter salary to a non-profit that provides support to first responders who are dealing with post-traumatic stress disorder (PTSD).

On April 6th, Youngkin appeared in front of a banner for the Virginia Law Enforcement Assistance Program (VALEAP) and stated that he would donate his $43,750 paycheck to the organization.

Gov. Youngkin donates his salary to the Virginia Law Enforcement Assistance Program-we need more politicians that give up wealth for public life, instead of politicians that cash in on it https://t.co/aJEJzbxLH5

During his campaign for governor, Youngkin, a reported multimillionaire, pledged to donate his entire $175,000 governor’s salary if he was elected to office. He has a reported net worth of $300 million. Youngkin said in a statement:

“I pledged to serve our Commonwealth without accepting a salary because I want to continue giving back to the Commonwealth and helping Virginians in every way I can.”

“I have chosen to donate my salary to the Virginia Law Enforcement Assistance Program (VALEAP) because of their important mission to assist law enforcement personnel and first responders who have undergone traumatic critical incidents.”

“This reaffirms my ongoing commitment to support our men and women in law enforcement with mental health resources, training, and equipment to ensure we are serving those that protect our communities across the Commonwealth.”

Virginia Gov. Youngkin donates first quarter salary to nonprofit law enforcement assistance program | Fox News. This is a very deserving group. PTSD is real. I was a paramedic along time ago, I still have dreams and thoughts of some stuff I saw. Be safe. https://t.co/LRLUyUTj5M


According to its website, VALEAP was established in 2008 following the horrific 2007 massacre at Virginia Tech University that left 32 people dead and 17 injured. The website states:

“No one understands cops like other cops. That’s why the organization is run by a dedicated team of volunteers who are trained law enforcement professionals, including Municipal Police Officers, Sheriffs’ Deputies, College/University Police Officers, State Troopers, and Law Enforcement Chaplains.”

Reportedly, during his campaign, Youngkin established his pro-police reputation and made law enforcement one of the first constituencies that he met with after he was elected.
n November 2021, he met with the Chesterfield County Sheriff and the Chesterfield County police for a roundtable discussion. After, he told reporters that it would be the first of many sessions that he would conduct. He said in a statement:

“We’re sitting here at a 20-year high in murder rates in Virginia. We see some of our great cities like Richmond ranked in the top 65 deadliest cities in America.”

The governor laid out a “Day One” plan that he said would increase law enforcement salaries, equipment budgets, and training. He also said he wants to make sure his administration protects qualified immunity, thus protecting law enforcement from what he calls “frivolous civil lawsuits.”
When asked about the uptick of violence in Richmond and how he plans to prevent future gun violence, Youngkin said:

“I think we first have to start with making sure that we have a fully-funded law enforcement community.”

He said that another step in preventing violence is to engage with the community and referenced a program that has been used in other cities to reduce gun violence. The governor said: