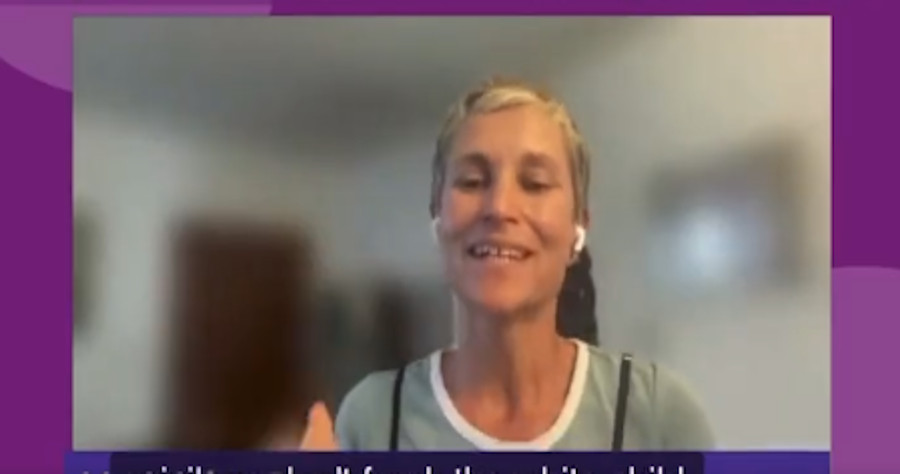 Libs of Tik Tok strikes again. Once again, the Twitter page has ripped the mask off an unhinged leftist lunatic, this time a teacher in Billerica, Massachusetts, a town located about 25 miles northwest of Boston.

National File reports that at a recent virtual meeting, a kindergarten teacher from the Billerica Public Schools was patting herself on the back about teaching her young five and six-year-old kindergarteners and first graders about “white privilege.”

The teacher, Brenna Woods, continued, mocking parents who have the audacity to disagree with her unhinged teaching of radical leftist ideology.

Woods, who (of course) has “they/them” pronouns listed on her Zoom page explained to fellow faculty members that she used remote teaching during the previous school year, calling that style of teaching “exciting.” Woods acknowledged that parents could hear her attempts at indoctrinating her young students, and then took to mocking their disgust.

“I did a lesson on white privilege, essentially. I talked about how some people are treated differently based on their race and what they look like,” she continued.

She went on to claim that while some parents approved of the “powerful conversation,” others had expressed their disapproval.

“I received some emails that were like ‘how dare you treat my white child differently?’ I’m like ‘was that hard for you?’” as her fellow indoctrinators nodded in agreement.

She then mocked the parents who were opposed to her lesson, claiming they “unknowingly live very privileged lives,” and called for “talking points” in order to explain things to families who objected to their children being taught self-loathing, anti-American ideology.

Last year, Billerica Public Schools staff were required to undergo so-called “racial diversity, equity, and inclusion professional development,” according to WickedLocal. Some parents wrote a letter objecting to the training and were summarily dismissed by district staff and administrators.

One teacher, Chris Dearbeck told the outlet that “white educators” such as himself could use a bit of extra help. “There’s a lot of education that needs to happen,” Dearbeck said. “Many of us don’t feel comfortable, and this is a step in the right direction.”

How about teaching kids to read, write and do math? That would be a “step in the right direction.”

Meanwhile, Louder With Crowder reports that a kindergarten teacher at the Prospect Sierra School in El Cerrito, CA., Madeleine Rogin, was also pushing critical race theory to her students. Rogin is under fire for telling her young students to “take a backseat” to their “people of color” peers and “be quiet.”

If that were not enough, she also bragged about the racist policy in a book she wrote, “Change Starts With Me.”

“I think there’s this cultural fear, we see it a lot around about ‘don’t say it, don’t teach about privilege, don’t freak the white child out.’”

“What we can do now is really help caregivers understand that helping their white child know the story of resistance and the story of movements of people coming together that is—that are always so diverse, but movements that are led by people of color, and how do you take a backseat and be quiet.”

California Kindergarten teacher explains her “anti-racist” approach of instructing white kids to “take a back seat, be quiet and learn”. pic.twitter.com/iVdPBfPcx9

Rogin, who (no surprise) has degrees in theater and dance, so that apparently makes her an expert on raising a child. We suppose if your child wants to take performance art she may have some degree of expertise, but otherwise she’s just another ignorant twit, as Crowder notes.

These are but two examples of why parents are pulling their children out of public schools in droves. Until the good teachers start speaking out against those such as Rogin and Woods, this is the garbage teachers are pushing on our kids.

Were it not for Zoom meetings and sites such as Libs of Tik Tok and Louder With Crowder, most parents would be oblivious to what their children are being brainwashed in.