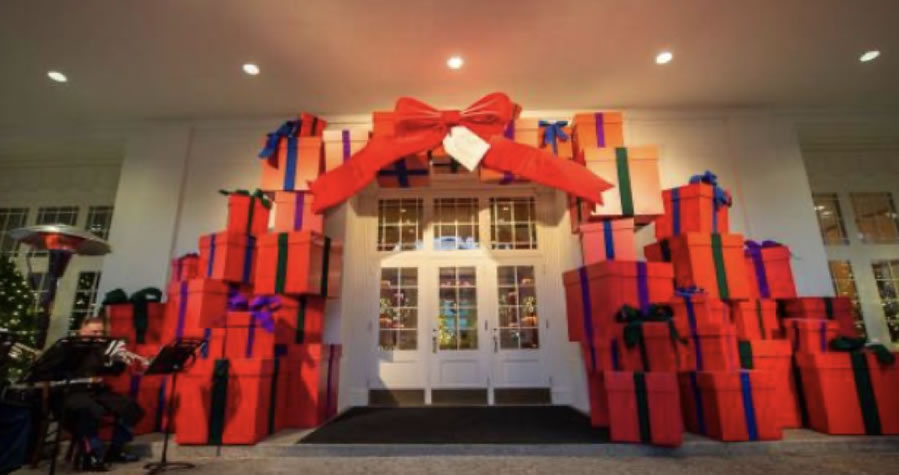 It was on this day in 2018 that we caught what we believed was the Washington Post’s fourth piece on Melania Trump’s Christmas decorations. Actually, it wasn’t all the decorations — everyone zeroed in on one hallway that had red trees. The Post wrote that the “spooky” trees induced “flashbacks to phantasmal nightmares from our shared cultural memory.” The Post also described it as “Melania Trump’s nightmare forest.” They’d also done a piece on how outside the U.S., the color red has been associated with sick Christmas trees.

And it wasn’t just WaPo: Slate asked what message the first lady was sending with her “red Christmas trees of death.” Journo Emily Singer said the decorations looked like they were “straight out of ‘The Shining.’” Keep in mind, these were the same people who saw Melania’s “neo-fascist” Rose Garden redesign and saw swastikas and the letters “KKK” in the shrubbery.

Now it’s our turn to see what Dr. Jill Biden has been up to:

Inspired by the acts of kindness and experiences that lifted our spirits this year, decorated rooms in the White House reflect the Gifts from the Heart that unite us all: faith, family, friendship, the arts, learning, nature, gratitude, service, community, peace, and unity. pic.twitter.com/fsaYFthIqH

She must have spent several minutes thinking this up!

Just waiting for the Toys R' Us giraffe to come through those doors.

Looks like the after Christmas sale or returns in back room at Macy’s. Or any bad mall circa 1980s. All are bad. #bringbackMelania

That is hideous. Some of the other photos where they used white lights on greenery are nice but, this particular display is awful. Yes, Melania has a designer's eye for beauty and it would be awesome to have her do the designs again.