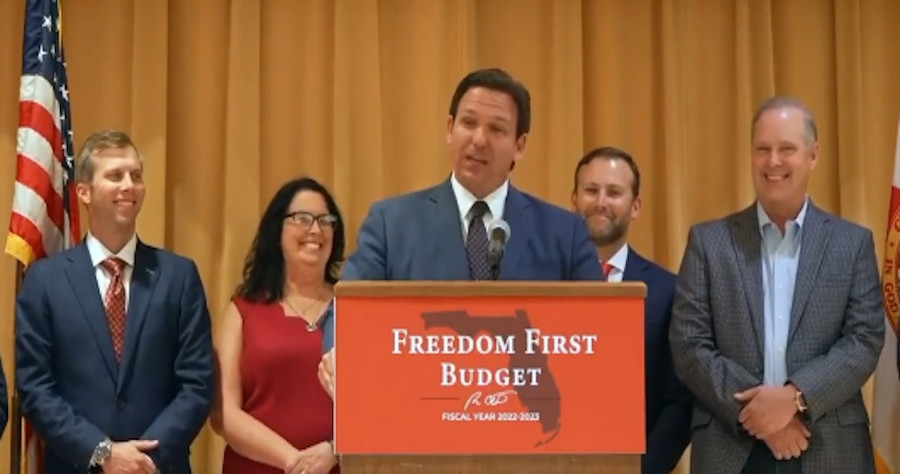 Ron DeSantis knows how to govern, there is no question about that. He also knows how to maneuver within the political landscape, which includes trolling the worst president in history with the much-deserved, albeit sanitized version, of “F*** Joe Biden.”

Whether he is hosting a speaking event in the community of Brandon, Florida or speaking off the cuff about the corrupt fool living in the White House, DeSantis knows how to inspire his base and strike a chord in the delusional minds of Democrats.

Referring to a recent Politico article that noted how “Biden and his aides have grown increasingly frustrated by their inability to turn the tide against a cascade of challenges,” DeSantis went for the jugular. He derided Brandon, then pointed out how all of the fawning media coverage hasn’t been enough to gaslight the American public.

“There’s a fella by the name of Brandon” who’s lashing out at staff and the media over his horrendous approval ratings 🔥🔥🔥 pic.twitter.com/EXQwK7MAop

“There’s a fella by the name of Brandon that people talk about that we have to contend with.

And I see this news report where Biden is so frustrated that his approval ratings are in the toilet. He can’t understand it.

This is how it’s done. He spits straight facts in moderated tone. The left hates DeSantis because it can’t combat him on a factual basis. Biden has been dragged through the mud as Brandon by college kids, a demographic that is king for Democrats. And there is no denying the difference in media coverage for Trump and Biden. Seriously, can you imagine if Trump had a son one-quarter the corrupt, porn-addicted, law-breaking sleazeball as Hunter?

The Politico story went on to note:

“Morale inside 1600 Pennsylvania Ave. is plummeting amid growing fears that the parallels to Jimmy Carter, another first-term Democrat plagued by soaring prices and a foreign policy morass, will stick.”

What’s more, Biden has to live with the fact that the American public doesn’t see eye to eye with his absurd assessment of his predecessor.

“The president has expressed exasperation that his poll numbers have sunk below those of Donald Trump, whom Biden routinely refers to in private as “the worst president” in history and an existential threat to the nation’s democracy.”

Such failure leads to moments like this, which Breitbart commented on:

“The Politico report adds to other recent stories outling Biden’s flailing presidency, including an NBC report detailing a frustrated president reminding his staffers he is the president and a CNN story detailing his messaging struggles online despite a team of over 70 people dedicated to online strategy.”

There is something sad and pathetic about the idea of Joe standing in front of his staffers and attempting to regain some authority by playing the “I’m the President” card. One wonders if he ever had any control, but he surely doesn’t now.

“Biden is exasperated, the report says, that his approval ratings are below former President Donald Trump’s.

The report also notes Biden is “far more prone to salty language behind the scenes than popularly known” and “erupted” over the optics of the baby formula shortages.”

Biden neither returned legitimacy to the White House nor did he unify the country. Instead, his presidency is the weakest in history – evidenced by foreign and domestic issues running our nation into the ground – and his rhetoric and policies have left American sharply pitted against one another unnecessarily.