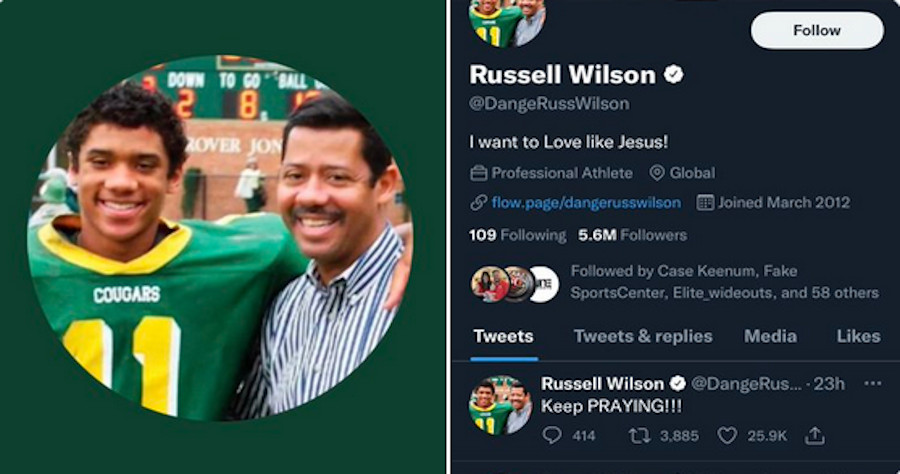 Is drama brewing between Russell Wilson and the Seahawks?

The longtime Seattle quarterback mysteriously purged his Twitter bio and profile photo of all mentions of the team Friday morning in another seed of NFL offseason drama.

Wilson changed his Twitter profile pic from him in a Seahawks uniform to a snap that showed him in a jersey during his prep school days in his native Virginia, according to fans on social media.

Twitter users noticed the social media switch, and are concerned that Wilson’s cryptic move is a sign he wants out of Seattle.

Could fans blame the 33-year-old if a change of scenery is what he desires?

The Seahawks finished this past season 7-10, with a last-place finish in the NFC West — and they’re in prime position for a rebuild with a large amount of 2022 cap space.

@JPFinlayNBCS this mean anything? Russ changed his pic from a Sea pic to when he played in VA 👀 pic.twitter.com/W8SztNtxkY

Two vital starters — left tackle Duane Brown and safety Quandre Diggs — are free agents, and Seattle’s defense was among the worst in the league in the 2021 season.

Wilson missed a stretch of games for the first time in his career after he underwent surgery in October on his right middle finger. An early recovery allowed him to return, but the Seahawks didn’t make the postseason.

In 2019, Wilson signed a four-year, $140 million extension, which includes a no-trade clause. He’s under contract for two more seasons and $51 million.

The 33-year-old made headlines last February when his frustrations with the organization reached a boiling point. Wilson’s relationship with head coach Pete Carroll also came into question after the quarterback said that he wasn’t sure if he’d be on the trading block.
At the time, there were discussions about a possible trade with the Bears, among other teams. However, Carroll reportedly nixed a potential Wilson trade to Chicago in March.

The seven-time Pro-Bowler later said that he and the Seahawks spoke about his comments over the phone and worked things out.

Wilson, who was drafted by Seattle in 2012, led the Seahawks to their lone Super Bowl win in 2014 over the Broncos.

While the internet runs wild with guesses about Wilson’s future, NFL alum Chad Johnson joined the conversation. The former wide receiver tweeted on Friday that he believes the quarterback will play for the Colts this coming season.

Neither Wilson nor the Seahawks have addressed the social media buzz.