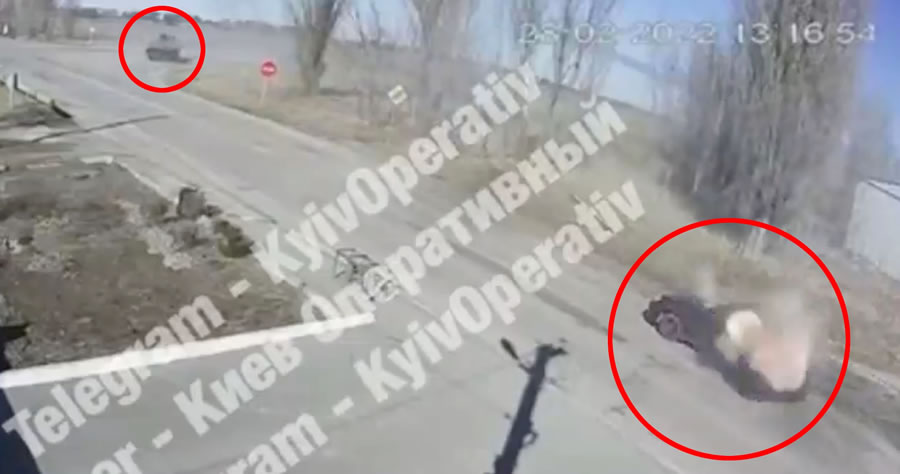 A Russian tank absolutely obliterated a civilian vehicle by opening fire — killing an elderly couple inside who appeared to be trying to flee.

This went down Tuesday in the town of Makariv, just outside of Kyiv. As you know, that area has been under siege for days … and people are attempting to get out any way they can, but many are still being targeted by Putin.

Ukrainian Defense Minister Oleksiy Reznikov revealed Tuesday that at least 400 civilian deaths have been recorded and 800 wounded in Ukraine since Russian forces launched their assault on Feb. 24.

Tragically, that happened here … the tank unleashing a blast from a good distance on an open road, with nothing but the car in sight. There was no threat posed, and nothing to indicate Ukrainian soldiers were afoot … and yet, the tank operator fired on the vehicle.
The man and woman inside died — a slaughtering that appears to have been captured by a nearby surveillance camera. In the aftermath, somebody filmed the destruction up close … and you can see the couple’s bodies leaning on each other.

Irpin bridge amid civilian evacuation fired at by Russia.

Ukrainian Territorial Defense soldier moments before the blast says “everything is bad, yesterday we evacuated kids, bodies of civilians.”pic.twitter.com/KwxizG6N1g