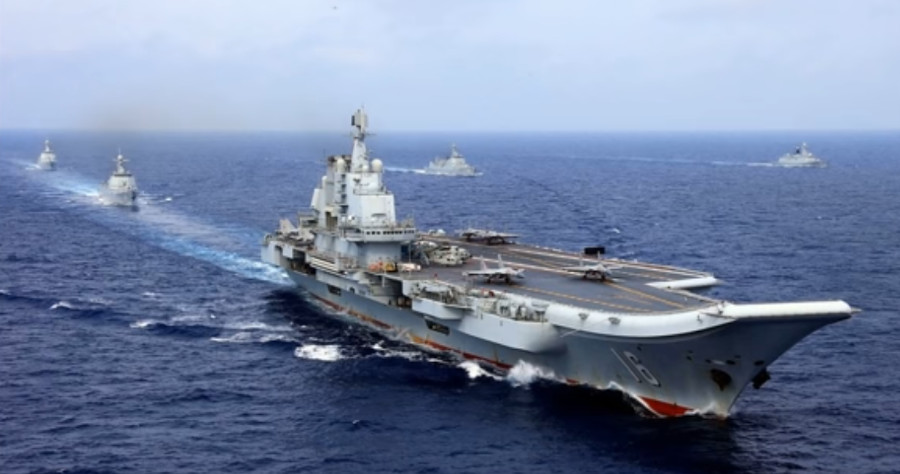 While the international defense community watches the progress of war in Ukraine, analysts are closely tracking signs that China is sharpening its ability to hit U.S. aircraft carriers, intelligence sources said.

“These absolutely are genuine images, and we have every reason to monitor this closely,” one analyst told Just the News. The intelligence contact made the comments while attending the annual Special Operations Forces Industry Conference (SOFIC) in Tampa, Fla., and spoke on condition of anonymity.

Some of the images appear to depict ships and piers, the analyst said, echoing findings that were described last week by the U.S. Naval Institute. If accurate, the images show that Beijing’s forces may be training to attack ships in their ports, via long-range ballistic missiles.

“The full-scale outline of a U.S. carrier and at least two Arleigh Burke-class destroyers are part of the target range that has been built in the Ruoqiang region in central China,” the group wrote in November. The site is near a former anti-ship ballistic missile target range, the group wrote. “This new range shows that China continues to focus on anti-carrier capabilities, with an emphasis on U.S. Navy warships.”

The testing site may be set up as a saber-rattling warning to the U.S., the intelligence analyst said on Tuesday.

“They know we are watching, so of course we factor in that we are the audience for their show,” the analyst said.

Watchdog lawmakers, meanwhile, have raised concerns that one group of Americans could be pulled into inadvertently supporting Chinese efforts to exert military dominance.

Five members of Congress on Wednesday demanded to know whether China’s aggressive efforts, along with human rights abuses, will be funded in part by investments from American servicemembers and federal workers.

The May 18 letter from members of the Republican Study Committee, led by Indiana’s Rep. Jim Banks, addressed the secretaries of Labor and the Treasury, expressing concerns about a proposal regarding a mutual fund window that will become available to federal employees. The proposal was initiated by the Federal Retirement Thrift Investment Board (FRTIB).

“In recent years, China has implemented an aggressive industrial strategy to ensure gains towards its future global dominance at the expenses of US national security,” the signatories wrote in the letter to Labor Secretary Marty Walsh and Treasury Secretary Janet Yellen. “There is a bi-partisan consensus that the United States must stand firm to counter China’s economic aggression through reducing U.S. economic dependence on China.

“Without additional due diligence by FRTIB regarding the mutual funds to be made available to investors, we are concerned that retirement funds of current and retired federal workers and military personnel are likely to be invested in Chinese companies whose activities pose threat to US national security and involve gross human rights abuses.”

The human rights abuses include Beijing’s documented mistreatment of ethnic Uyghurs in China.

“No one will take the US government’s determination to push back China’s malign behavior seriously if our federal employees’ retirement money is invested in Chinese companies that engage in dangerous and abusive behavior,” the congressmen wrote.