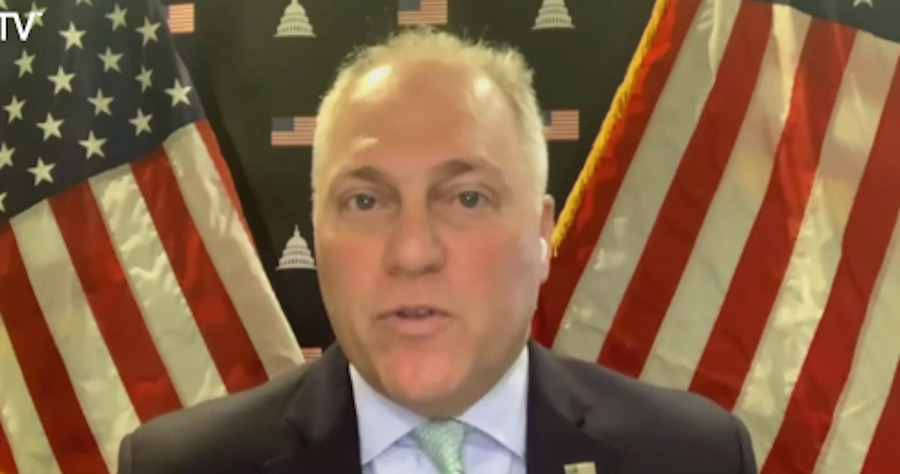 “His regulating agencies and the financial agencies, the SEC, the CFPB, the whole alphabet soup of federal agencies are coming after energy companies,” the congressman told Fox Business’s “Mornings with Maria Bartiromo.”

“We had the heads of the oil and gas companies before the Energy and Commerce Committee a few weeks ago. I asked the head of Exxon Mobile as well as all the other heads. I held up a list of the mountains of regulations that Joe Biden’s put against American energy, and I said, is this hurting your ability to produce more and lower the price of gasoline? They all said, ‘Yes,’ of course, it is, and Joe Biden won’t reverse that,” Scalise said.

“He campaigned saying he was going to end drilling in America. He bragged about it, and then he’s given AOC, Bernie Sanders, Elizabeth Warren all the radicals in Washington. He’s turned the policy over to them to go after American companies like energy companies, and then the prices went through the roof, and people got really angry, and he tried to blame everybody else,” he said.

“It’s Joe Biden’s policies. Everybody knows that he can change these policies today. He just won’t because he is beholden to the radical left,” the congressman said.

Scalise that Biden is blaming everyone else for the record high gas prices – Russian President Vladimir Putin, oil companies, and oil refineries – but won’t admit that his policies are to blame.

“You know this is a disturbing pattern we’ve seen from President Biden on so many of the problems that he created that are hurting families is that he just blames everybody else. Maybe they don’t have mirrors in White house, but he’s looking around. He’s pointing fingers,” he said.

“He’s throwing spaghetti at walls, and nobody’s buying it, because they’re watching so many parts of the fabric of the country. Look at gasoline prices. Gee whiz. We’re over 100 percent higher than when Joe Biden took office, more than double over $5 a gallon, and look at the long list that he’s blamed instead of himself for that. It was Putin. It was the oil companies. It was the pandemic. He’s blamed refineries,” Scalise said.

“He supported a bill that passed by Speaker Pelosi to allow you to sue your local gas station if you don’t like the price. The only thing they haven’t seen done is support increasing production in America,” the congressman said.

“He’s going to fly to Saudi Arabia probably 5700 miles on Air Force One. Who knows what the carbon footprint of that flight’s going to be to beg them to produce more oil, but he won’t let American companies produce oil here,” he said.

“He doesn’t even have to fly less than a thousand miles to Port Fourchon, Louisiana, where they would say ‘Yes, we will drill here in America.’ Lower emissions, more money for America or lower gas prices at the pump, but he says no to that, and then he thinks he can blame other people,” Scalise said.

“Everyone knows that it’s Joe Biden’s policies that are creating dramatically higher prices than we’re seeing anywhere else, and surely what we paid just two years ago when we had a great robust energy policy,” the congressman added.