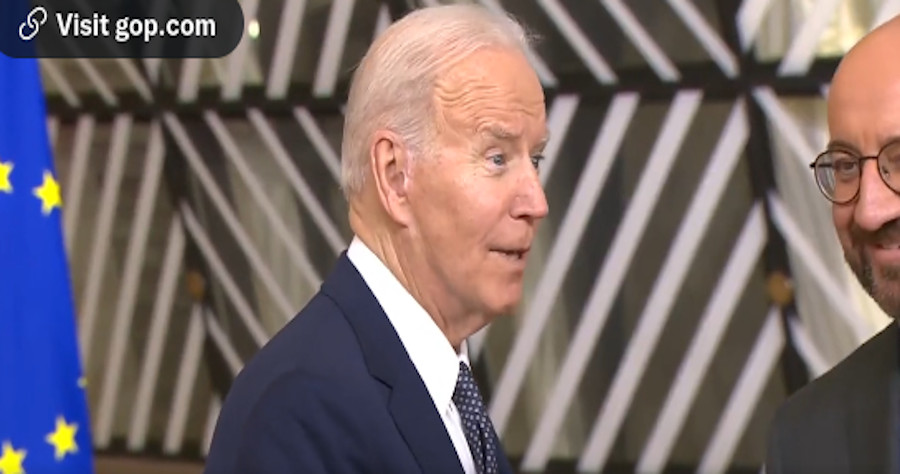 On Thursday, greeting President of the European Council Charles Michel at the EU-U.S. summit on the Ukrainian crisis, President Biden uttered one of the items on his wish list, declaiming, “I came to congratulate a man who just got re-elected — without opposition! I dream about that someday.”

“European Council President Charles Michel was unanimously reelected for a second term at a meeting of EU leaders on Thursday,” Politico reported.

BIDEN: “I came to congratulate a man who just got re-elected — without opposition! I dream about that some day.”

Biden’s statement comes after a year in which he has often harshly criticized his GOP opposition. The Washington Post admitted in January that Biden had “escalated his partisan rhetoric Wednesday during his first news conference in 10 months, laying the blame for his stalled agenda at the feet of Republicans and suggesting on the eve of his one-year anniversary that he has been surprised by their intransigence.”

Last July, speaking at the National Constitution Center in Philadelphia, Biden issued a bitterly partisan attack on Republicans over voter rights, snapping, “While this broad assault against voting rights is not unprecedented, it’s taking on a new and, literally, pernicious forms.” He said:

In Texas, for example, Republican-led state legislature wants to allow partisan poll watchers to intimidate voters and imperil impartial poll workers.  They want voters to dive [drive] farther and be able to be in a position where they wonder who’s watching them and intimidating them; to wait longer to vote.  To drive a hell of lot lo- — excuse me — a long way — [laughter] — to get to vote.  They want to make it so hard and inconvenient that they hope people don’t vote at all.  That’s what this is about.

This year alone, 17 states have enacted — not just proposed, but enacted — 28 new laws to make it harder for Americans to vote, not to mention — and catch this — nearly 400 additional bills Republican members of the state legislatures are trying to pass.

While this broad assault against voting rights is not unprecedented, it’s taking on a new and, literally, pernicious forms.

To me, this is simple: This is election subversion.  It’s the most dangerous threat to voting and the integrity of free and fair elections in our history.  Never before have they decided who gets to count what votes count.