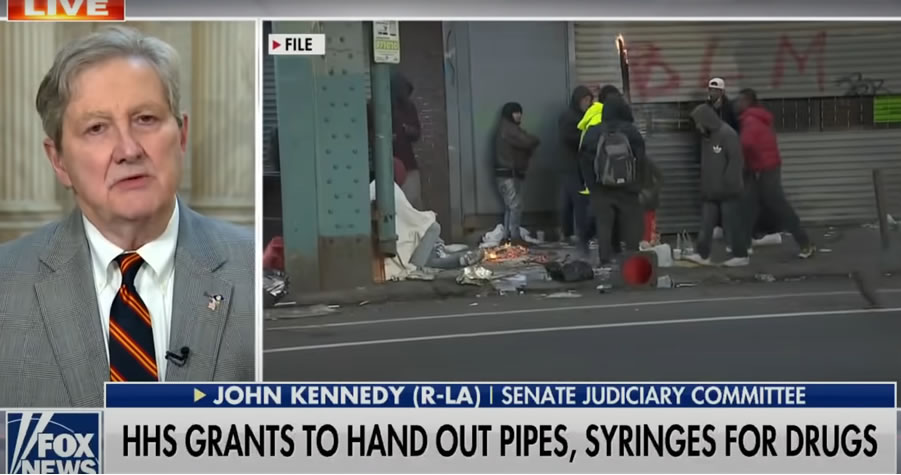 Senator John Kennedy (R-La.) had some strong words when he responded to the Biden administration’s plan to provide sterile crack pipes to drug addicts. Recently, the president signed off on a $30 million program through the Department of Health and Human Services (HHS) to make drug use safer. As PJ Media’s Chris Queen noted, a covered item in the grant program is “smoking kits/supplies.” The grant assists non-profits in supplying more than crack pipes. Syringes, fentanyl strips, tests to screen for diseases, and condoms are also covered. However, the focus is on the items that seem to encourage drug use.
Because everything is ironic, handing out clean drug paraphernalia is part of the 2022 “harm reduction program” for HHS. Kennedy blames programs like this on the “wokeism” that “runs in the Democratic family.” He noted that woke Democrats run many of our large urban areas. Then he described the worldview that underpins programs like handing out free crack pipes and leads to higher crime rates. “Wokers believe that the criminal is a victim.” This analysis is 100% correct. Victimhood is the currency of the Left, and the more victim categories you can claim, the more free stuff they will throw at you.

Kennedy continued, “Wokers believe that when a criminal commits a crime, it’s not the criminal’s fault. It’s the fault of an unfair world.” Incredibly, Team Biden thinks free crack pipes will make the world more “equitable.” Kennedy wasn’t finished. “And wokers believe that punishment and prisons and cops just make things worse. And the American people don’t believe that.” In fact, many Americans probably agree with the senator’s bottom line on woke criminal justice policies. “Unless you have the IQ of a garden pest, you know you cannot order civilized society based on that worldview.”

America’s Newsroom anchor Dana Perino noted that Fox just reported over 100,000 overdose deaths in America in the past year. She emphasized that the overdose epidemic is not just affecting hardcore addicts living on the street. Many of these deaths occur during first-time experimentation, where dealers lace illicit drugs with highly lethal drugs like fentanyl. On Tucker Carlson Tonight, Bill Melugin reported that in fiscal year 2021, Customs and Border Patrol seized 11,201 pounds of fentanyl at the southern border. Two milligrams of the substance is considered a lethal dose of fentanyl. There are nearly half a million lethal doses in just one pound.

Joe Biden sponsored the 1994 Crime Bill which locked black people up for being addicted to crack.

Fast forward to 2022, he is handing out free #crackpipes to black people.

I guess he figures killing us is more cost effective than keeping us behind bars.

What a time to be alive