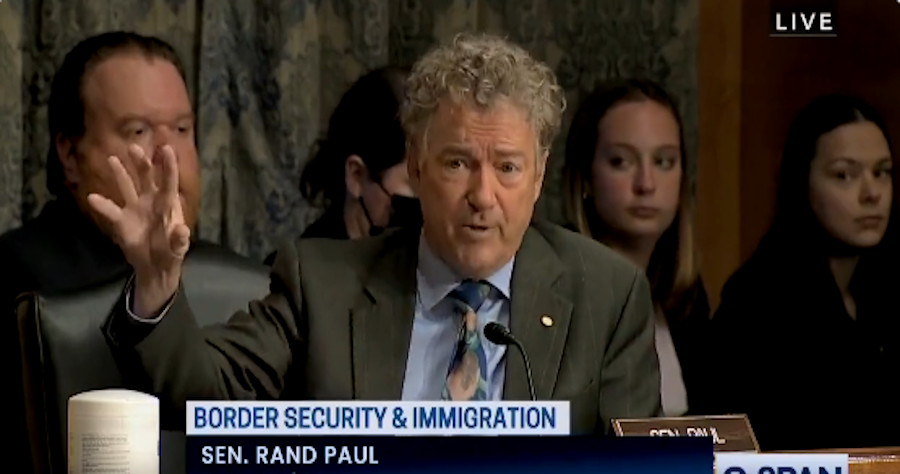 Sen. Rand Paul (KY) has been on a roll the last few years taking on gender nonsense and COVID-19 restrictions. Now, he has turned his attention to the Biden Administration’s Ministry of Truth as he goes head to head with DHS Sec. Mayorkas. Paul starts by ripping into Mayorkas and the Ministry of Truth’s hypocrisy as he brings up the Steele Dossier, which has been concluded by the FBI to be Russian disinformation yet which the Ministry of Truth curiously has 0 interest in, despite it being propagated by CNN and social media obsessed leftists for 6 years.

Mayorkas tried to dodge this by saying that the Steele Dossier is not the type of disinformation which the DHS is concerned with, and going on about cartel disinformation instead, however, Senator Paul does not let him weasel out of it so easily.

Given that the 2020 election fraud has been, upon announcement, one of the core pieces of “disinformation” that the Disinformation Governance Board has obsessed itself with, you would think that they’d be equally concerned with Russian disinformation which targets elections, like the Steele Dossier. That is, if they are nonpartisan as they claim to be.

Paul leans on the fact that there is not even an agreement on what disinformation is, stating.

“I think you’ve got no idea what disinformation is.”

Bringing up Iran Contra, WMDs, and other pieces of government disinformation, Paul annihilates the idea that the government should be the arbiter of truth in this country, and makes a compelling argument for the merits of debate and of American citizens determining the truth from the lies for themselves.

Mayorkas attempts to dodge questions left and right, left stuttering and repeating himself by the end and unable to answer simple questions, such as if public health is part of the Disinformation Governance Board. This dope is the man Biden put in charge of Homeland Security, and all he wants to do is arbitrarily select partisan “disinformation” to combat.