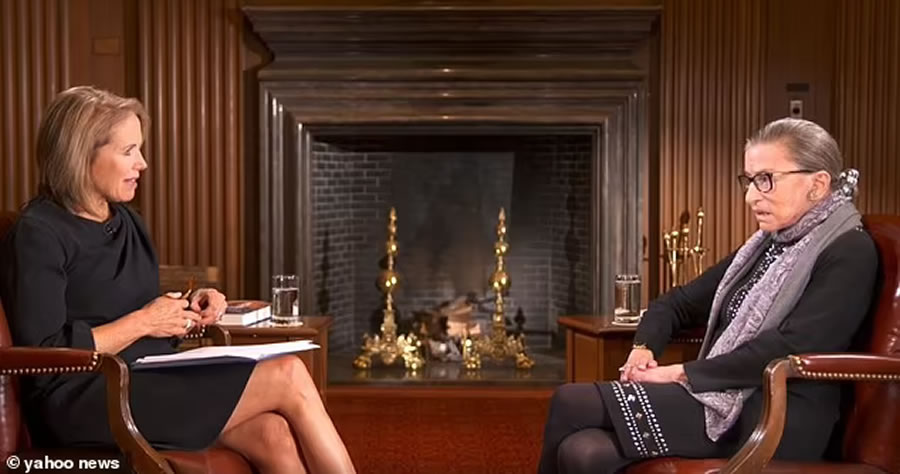 In her new book, Katie Couric admits she edited a 2016 interview with Ruth Bader Ginsburg to suppress the Supreme Court Justice’s feelings about people who kneel in protest during the national anthem.

The former Today Show anchor reveals in her memoir “Going There,” which releases October 26, that Ginsburg told her athletes who kneel during the national anthem are showing “contempt for a government that has made it possible for their parents and grandparents to live a decent life.”

Couric writes that she removed the comments from the interview, published at Yahoo five years ago, because she feared the then-83-year-old justice was “elderly” and “probably didn’t fully understand the question.”

According to the Daily Mail, which first broke the story, Couric said her intention was to “protect” Ginsburg because she believed the issue of racial justice was a ‘blind spot’ for her. Couric did, however, include Ginsburg’s statement the anthem protests “dumb and disrespectful.”

This isn’t the first time Couric has been caught in a controversy over her editing choices. The same year she buried Ginsburg’s comments on kneeling, she also deceptively edited a documentary on gun control.

Katie Couric says she cut quotes from an interview with RBG in 2016 where the SCOTUS Justice said that kneeling during the National Anthem shows a “contempt for a government that has made it possible for their parents & grandparents to live a decent life.”https://t.co/XBnopuptSu

It’s amazing that RBG would have eventually gotten canceled. https://t.co/r8Iru6lUvB

Couric writes that she thought the justice was “elderly and probably didn’t fully understand the question.”https://t.co/tnsgWnNK6k

Keep in mind, RBG was ON THE COURT at this time:

“But Couric writes in her memoir that she thought the justice, who was 83 at the time, was ‘elderly and probably didn’t fully understand the question.'”

She was still serving as a JUSTICE ON THE FLIPPING SUPREME COURT!!https://t.co/u8XI5Q3OV2 https://t.co/b8Ck0sUykF

So, instead of asking Ginsburg to clarify, Couric just memory-holed it?

Didn’t fit the narrative. They do this alllllll the time and then bemoan, without irony, the declining trust in the news business. https://t.co/5rbv62Upiy