“Smashed By A Pack Of Feral Animals”: Watch As NYC Car Gets Surrounded, Beaten By Teen Thugs 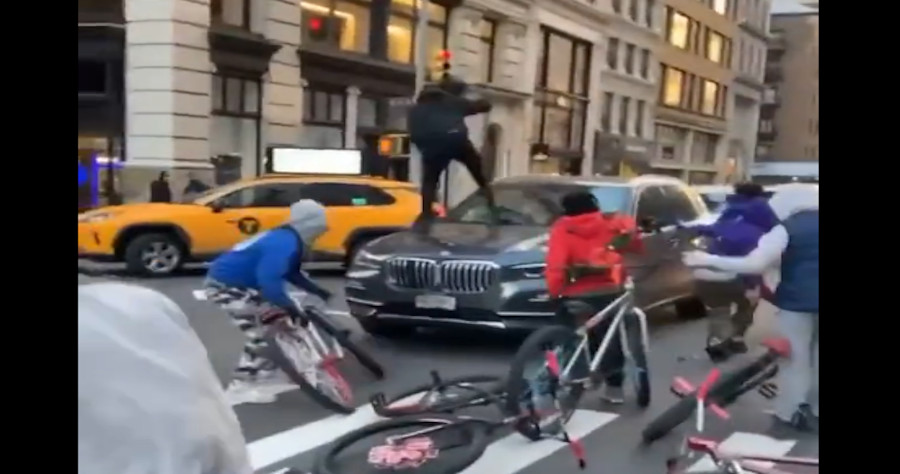 You don’t need me to tell you that New York City is a hellhole. Decades of what can only be described at this point as intentional mismanagement has given rise to unhindered lawlessness and criminality.

After the George Floyd Riots of 2020, which unleashed unprecedented destruction on a national level, every big city was put on high alert. The message was clear: Thugs and criminals ran the show.

Long after those planned riots dissipated, places like New York City regularly experienced aftershocks. Because Trump had been removed from office, the media didn’t care anymore to propagandize institutional racism. And, because the general public could only tolerate so much chaos from the same community, shall we say, it didn’t serve their purpose anymore to keep reporting on a daily basis – although they easily could have.

Elderly couple get their car smashed by a pack of feral animals. pic.twitter.com/a4aSU5lv1Y

One conservative voice of reason, Stephen Crowder, asked a basic question in response to this video: Would hitting the gas be a reasonable option? In terms of self-preservation and self-defense, it seems that hitting the gas is the only option. If you’re the driver, are you sure those feral savages will stop after getting a few bike smashes or fistfuls of window? What would stop them from yanking some white dude out of the car and exacting violent retribution? The only way this nonsense ends is if an eye meets an eye.

A lot of other Twitter comments pointed out that these situations always seem to occur in big blue cities. You rarely hear of thuggish lunacy in states like Florida, Texas, or other red states. An armed citizenry repels would-be crimes, because as dumb as many of our urban youth are, they wouldn’t take their chances smashing cars for pleasure if they knew the window would roll down and return what they deserve. However, a fancy car in the middle of New York City? Between the likelihood you have some wussy liberal and the fact that hardly anyone carries in that den of corruption, and you have the recipe for endless cycles of violence.

Amazingly, this story was picked up by a local news outlet. The ABC affiliate in New York tracked down the driver, a 36-year-old man who was driving his mother back from a charity event. He described the horrific events as they unfolded:

“But it was only once they started smashing the windshields as soon as the windshield broke, and the glass hit our faces and landed in our laps and I realized, like the ceiling is collapsing,” Max said. “And if they jump on it one more time they’re going to gain access to the car. My mom is on the phone with 911 dispatcher who probably couldn’t understand a word she was saying, but literally the words I can’t get out of my mind were ‘they’re going to kill us, we are going to die…please send help.”