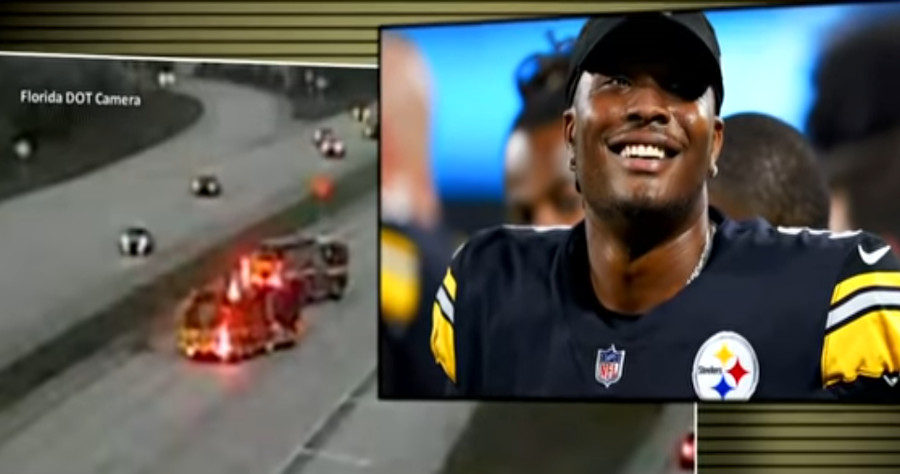 Pittsburgh Steelers quarterback Dwayne Haskins was killed Saturday morning when he was hit by a dump truck while walking on a South Florida highway.

Haskins, 24, had been in South Florida to train with other Steelers quarterbacks, running backs and wide receivers.

The accident happened around 6:37 a.m. on I-595 West at the I-95 interchange outside Fort Lauderdale-Hollywood International Airport, according to the Florida Highway Patrol. Haskins was killed in the accident, but officials did not reveal why he was walking on the highway, said Lt. Indiana Miranda, highway patrol spokeswoman.

He was just walking on the highway and got hit,” Miranda said.

The driver “is in full cooperation” with the investigation, she told The Post.

The former Ohio State standout had been in the NFL since 2019, first with Washington and then as a third-string quarterback with the Steelers. The Steelers re-signed him this offseason to a one-year contract worth $2.5 million.

“I am devastated and at a loss for words with the unfortunate passing of Dwayne Haskins,” Steelers coach Mike Tomlin said in a statement. “He quickly became part of our Steelers family upon his arrival in Pittsburgh and was one of our hardest workers both on the field and in our community. Dwayne was a great teammate, but even more so a tremendous friend to so many. I am truly heartbroken. Our thoughts and prayers are with his wife, Kalabrya, and his entire family during this difficult time.”

Haskins was drafted 15th overall in 2019, but he struggled once given the starting job with the Washington Commanders.

“We are devastated to hear the news of the tragic passing of Dwayne Haskins Jr,” Commanders co-owners Dan and Tanya Snyder said in a statement. “He was a young man with a tremendous amount of potential who had an infectious personality. To say we are heartbroken is an understatement. Our hearts and prayers are with the members of Dwayne’s family and all those who knew him and loved him.”

Prior to making the league, the New Jersey native led Ohio State to the Rose Bowl in the 2018-19 season, beating Washington in Urban Meyer’s final game as head coach. He also set Big Ten single-season records for passing yards (4,831), touchdown passes (50) and total offensive yards (4,939) and was a Heisman Trophy finalist.

“The Ohio State Department of Athletics is terribly saddened to learn of the death of Dwayne Haskins Saturday morning,” Ohio State’s athletic department said in a statement. “We are thinking of the entire Haskins family during this most difficult time. Our prayers are with the family, and with his current and former teammates, coaches, friends and relatives.”

Memorably, Haskins came off the bench in 2017 when J.T. Barrett got hurt mid-game in Ann Arbor to lead the Buckeyes to a win over Michigan. That seemed to set Haskins on a path to stardom, but upon reaching the NFL, Washington had issues with his work ethic and repeated COVID-19 violations. Late in the 2020 season, he was benched for Taylor Heinicke before being released.
The Steelers signed him in 2021, using him as the third-string QB behind Ben Roethlisberger and Mason Rudolph. He did not play last season and was inactive for all but one game.

Haskins posted an Instagram story this week showing him having fun, presumably in South Florida, with Steelers running back Najee Harris, among others. He finished it with a quote: “‘It is what it is’ will keep you at peace.”