Steve Hilton: ‘Putin can see they’re a joke. He can see how Biden has made America weaker’ 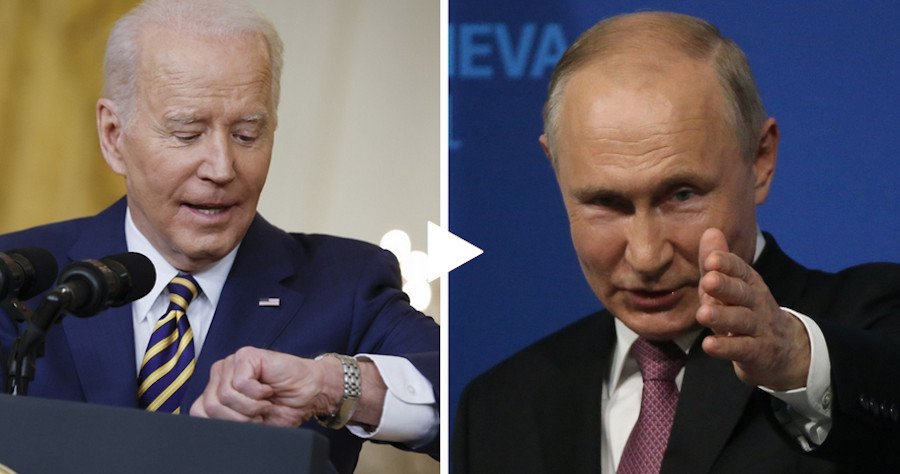 Steve Hilton blasted President Biden for being a weak leader who is emboldening tyrants around the world to become aggressive with their interests on “The Next Revolution.”

Hilton pointed out that one of the ways the administration is trying to push back against the invasion is through “media relations.”

“The Biden people are patting themselves on the back for that brilliant new strategy of trying to beat Putin at his own game of information warfare by disclosing his moves in advance. Because today’s Democrats treat everything as PR, because for them, virtue-signaling is more important than reality. They seem to think that they can somehow beat Putin with media relations, head fake him into backing down,” Hilton said.

Putin can smell Biden’s weakness a mile off

Biden, according to the Fox News host, has been wrong on “major foreign policy and national security issue over the past four decades.”

Hilton went on to blast Biden for failing to “shut down” the Nord Stream 2 pipeline, which is being built from Russia to Europe via the Baltic Sea. U.S. officials warned Congress that a Russian invasion of Ukraine could compromise the pipeline, according to Reuters. In the event of an invasion, according to the report, U.S. officials have “an understanding with Germany about shutting down the … pipeline.”

Secretary of State Antony Blinken said the U.S. was prepared to impose “severe costs,” such as sanctions if the former Soviet country invades Ukraine. Russia annexed Ukraine’s Crimean Peninsula in 2014, and the Obama administration responded with economic sanctions. Jake Sullivan, Biden’s national security adviser, told reporters the White House was willing to use the pipeline, which is owned by a Russian company called Gazprom, as leverage.

However, in May, Biden lifted sanctions on a company Nord Stream 2 AG, whose parent company is Gazprom, much to the chagrin of critics of the natural gas pipeline.

“The Biden administration’s decision to waive sanctions on Nord Stream 2 was a mistake that is allowing Russia to increase its malign influence in the region, including its ability to manipulate prices and supply. We need stronger action than we’ve seen from this White House, and this legislation is a way to require it,” Sen. Lisa Murkowski, R-Alaska, said in January.

“Now, Biden and all the establishment geniuses want to shut down Nord Stream, they say. But when Trump said it, it was all, ‘Oh my God, how embarrassing, how undiplomatic.’ What a joke they all are. Putin can see they’re a joke. He can see how Biden has made America weaker, not just the self-sabotage on energy, but weakening our defenses, cutting our military,” Hilton said.

“None of this helps America. It hurts America. And here’s what else hurts America the idea that random dictators can just invade countries on a whim or to seize resources, or because of some twisted historical obsession, as we’re seeing with Putin in Ukraine and Xi Jinping with Taiwan, that it’s not a world we should want to live in,” Hilton said.

“It does matter [that] countries play by the rules of civilized society. People look to America to uphold the values of freedom and opportunity and self-determination. That’s why so many people admire and love America. And as a new citizen, I can testify to that personally.”