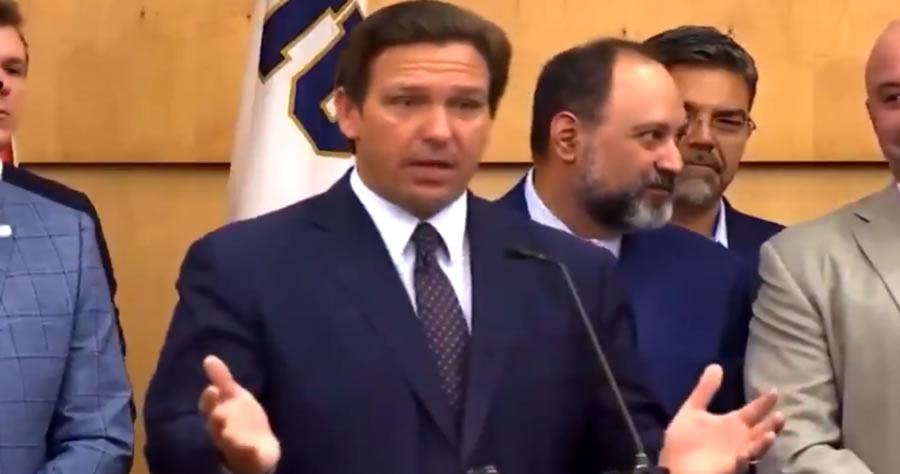 Florida Gov. Ron DeSantis keeps earning his internet-anointed title of “America’s governor,” as seen Monday during a signing ceremony for a bill the Republican said will crack down on Big Tech censorship.

The ceremony took place at Florida International University in Miami, and DeSantis took questions from the media. At one point, a Miami Herald reporter asked whether the legislation was “for” former President Donald Trump.

“You’re a loyal supporter of former President Donald Trump,” the reporter began “Donald Trump is now a resident in Florida and he was de-platformed. Is this bill for him?”

“The bill is for everyday Floridians,” Gov. DeSantis said, as supporters voiced their frustration over the question. “It’s what we said. And it would allow any Floridian to be able to provide what they’re doing.”

Taking advantage of the opportunity provided by the reporter, DeSantis criticized Big Tech for its inconsistency, which prompted Media Research Center’s Curtis Houck to describe the response as “Straight FIRE” while sharing the clip online. He would also declared that DeSantis “absolutely destroyed” the reporter.

“But I do think that’s another issue that has been brought to bear,” DeSantis told the reporter. “When you de-platform the president of the United States but let Ayatollah Khomeini talk about killing Jews, that is wrong.”

Straight FIRE -> @GovRonDeSantis absolutely destroyed this Miami Herald reporter after she asked whether the state’s censorship law was created “for” former President Trump.

“When you deplatform [Trump] but you let Ayatollah Khamenei talk about killing Jews, that is wrong.” pic.twitter.com/afuMN8FjC2