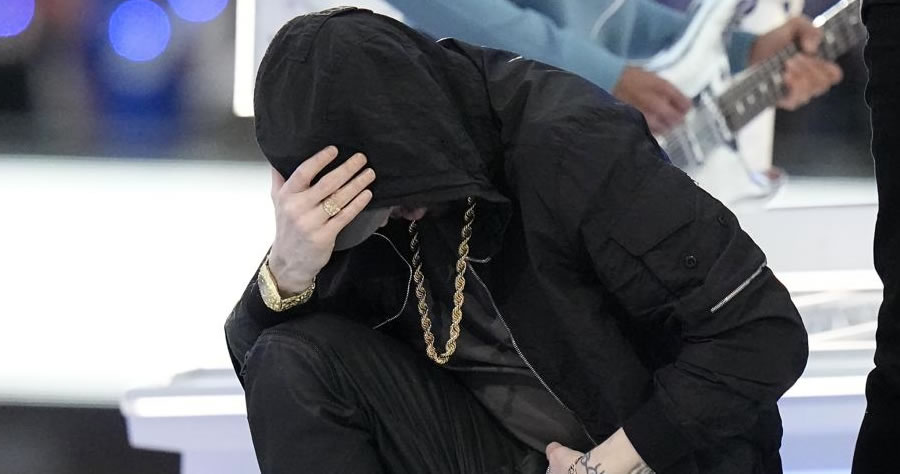 Rapper Eminem took a knee Sunday at Super Bowl LVI’s halftime show in Inglewood, California, echoing protests launched by Colin Kaepernick against racial injustice, despite the National Football League denying his request to do so.

At least two players with the Los Angeles Rams – Terrell Burgess and Nick Scott – could be seen kneeling during the national anthem before the game.

Kaepernick, a former quarterback for the San Francisco 49ers, in 2016 led a series of protests meant to highlight the injustice of police brutality against Black Americans by kneeling during games as the national anthem played.

NFL spokesman Brian McCarthy on Sunday said the NFL was aware that Eminem was going to kneel because officials “watched it during rehearsals this week.”

When the @NFL tells you not to take a knee during the halftime show. Thanks, @Eminem. #NFL @Kaepernick7 #TakeAKnee pic.twitter.com/wiqUPhXXNO

The NFL was reportedly ok with Eminem’s kneeling, according to the league’s spokesperson.

The part of the show were Eminem kneeled? Report stated it was against the wishes of the NFL.
However, NFL spokesman Brian McCarhy told me that report is false. The NFL watched every rehearsal this week and that element was included.
Just passing along.

Dre and Snoop opened the show with “Next Episode” and “California Love.”

50 Cent, not among the announced performers, started his “In Da Club” while hanging upside inside one of the rooms.

Blige was decked out in silver sparkles and surrounded by backup dancers as she sang a medley of her hits.

The set was surrounded by what looked like a lit-up cityscape from above, with classic convertibles and replicas of the Tam’s Burgers stand and the sculpture outside the Compton Courthouse.