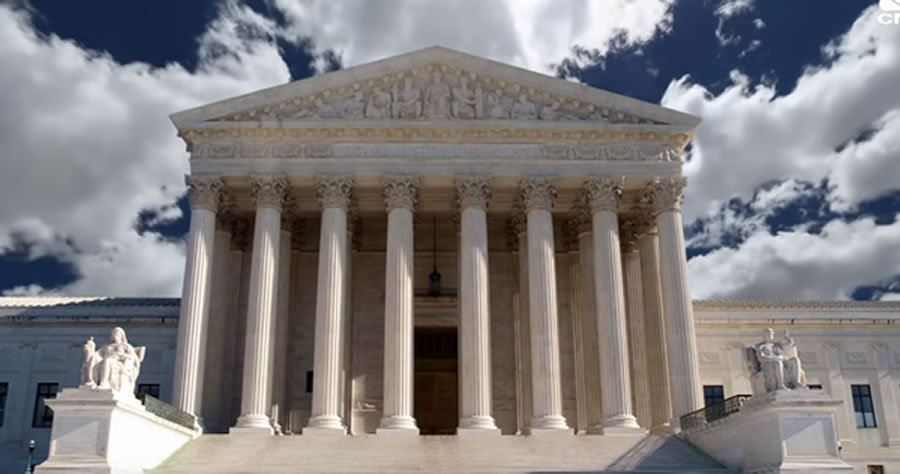 The U.S. Supreme Court delivered a bolt-from-the-blue on Monday night. An unprecedented leak from its hallowed chambers that Roe v. Wade is about to be struck down instantaneously transformed the American political landscape.

Justice Samuel Alito authored the withering preliminary decision on behalf of the prospective majority — a sneak preview of a ruling that is set to come six or even eight weeks from now. The 5-3 ruling, remarkably absent the stamp of imprimatur from nominal Chief Justice John Roberts, would come from conservative justices who have been steeled under the left’s persistent fire: Alito, Thomas, Barrett, Kavanaugh, and Gorsuch.

These justices are no strangers to the left’s vicious tactics. Thus, as one might expect, the left’s outrage has already been dialed up to an eleven for an election-year GOTV initiative spurred by a partisan mole from within the court.

The radical protesters gathered quickly around the court after the leak to vehemently express their anger about the forthcoming decision. Their rapid mobilization suggests an orchestrated operation, rather than the spontaneous outpouring of partisan stragglers who happened to be within the vicinity of the court on a Monday evening.

In the interest of security, the Supreme Court’s police officers erected barricades around the court to prevent the protest from developing into an ‘insurrection’ over the decision.

The security team tasked to protect the SCOTUS thus envisions a riot might pour forth destruction and mayhem, as was seen from the day Donald Trump stepped foot in the Oval Office throughout his very last year as president, when hundreds of Black Lives Matter protests led to the deaths of dozens of Americans and billions of dollars in damage.

Tempers began flaring near the court as protesters and counter-protesters argued about the forthcoming decision.

Senators and Representatives seized on the polarizing issue to pronounce that now was the time to codify Roe v. Wade into law or otherwise ‘expand the court.’

“A stolen, illegitimate, and far-right Supreme Court majority appears set to destroy the right to abortion, an essential right which protects the health, safety, and freedom of millions of Americans,” Senator Ed Markey tweeted. “There is no other recourse. We must expand the court.”

“Overturning Roe would put the lives of women across the country at risk,” Rep. Ilhan Omar (D-MN) tweeted. “It would fly in the face of decades of precedent and the overwhelming majority of public opinion. And they will not stop here. Expand the court.”

“People elected Democrats precisely so we could lead in perilous moments like these- to codify Roe, hold corruption accountable, & have a President who uses his legal authority to break through Congressional gridlock on items from student debt to climate,” Rep. Alexandria Ocasio-Cortez (D-NY) tweeted. “It’s high time we do it.”

“If we don’t, what message does that send?” she added. “We can’t sit around, finger point, & hand wring as people’s futures + equality are on the line. It’s time to be decisive, lead with confidence, fight for a prosperous future for all and protect the vulnerable. Leave it all on the field.”

“An extremist Supreme Court is poised to overturn #RoeVWade and impose its far-right, unpopular views on the entire country,” Senator Elizabeth Warren (D-MA) tweeted. “It’s time for the millions who support the Constitution and abortion rights to stand up and make their voices heard. We’re not going back—not ever.”

The phrase “we will not go back” was also a rallying cry for protesters gathered at the Supreme Court.

The Supreme Court document leak would be a cause for an FBI investigation and immediate expulsion of any clerk(s) responsible if it were the result of a Republican-led or opposition journalist operation. It will be a telling indictment of the Department of Justice if it once again fails to perform its basic duty and hold those responsible for an unprecedented leak that threatens the integrity of the nation’s highest court.

The degradation of the high court almost certainly will be accompanied by a farcical descent into self-parody. Unironically shouted cries of ‘my body, my choice!’ are now to be expected from the same radicals who denied Americans had the right to decide what vaccines are injected into their own bodies. People who claimed until last night’s document leak that they could not define a woman are now insisting that everyone without a uterus shut up about the divisive issue.

At least one Republican is going on offense: Gov. Kristi Noem of South Dakota announced her intention to protect the unborn should the Supreme Court majority stay true to its preliminary decision.

“If this report is true and Roe v. Wade is overturned, I will immediately call for a special session to save lives and guarantee that every unborn child has a right to life in South Dakota,” Noem tweeted.

It is also revelatory that the Democratic Party immediately weaponized the SCOTUS document leak to send forth fundraising emails.

“Right after news of the SCOTUS leak broke, fundraising texts for the DNC went out,” Pedro Gonzalez noted. “If this whole thing wasn’t coordinated between activists, lib media outlets, and the DNC, it may as well have been.”

For better or worse, the “current thing” will now be abortion from now until the midterms. The emotional issue will certainly balkanize a nation that is already wrought by polarizing topics; if there is a silver lining to it all, it means the hard left is ready to move on from weaponizing Covid.

Ultimately, at the end of it all, one can expect a red state-blue state divide to be further cemented, underscoring the need for Roe v. Wade to be overturned and the abortion issue to be sent back to the states.