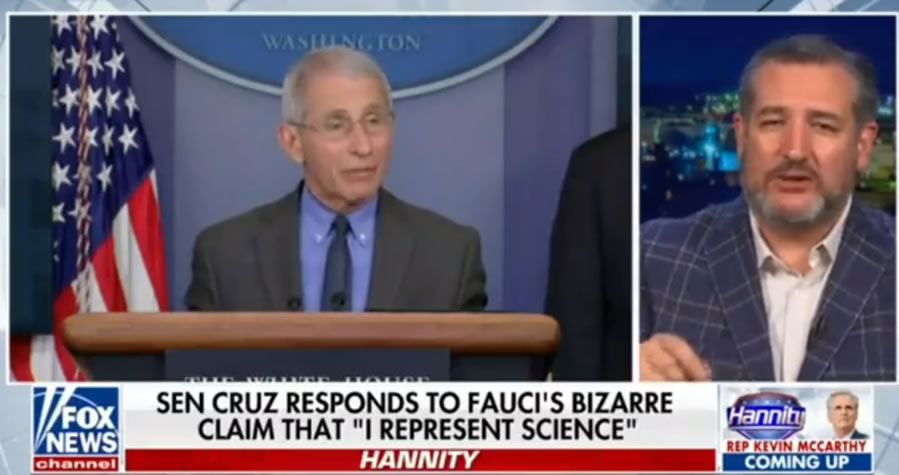 During an interview on Fox News Monday night, Senator Ted Cruz (R-TX) named Dr. Fauci ‘the most dangerous bureaucrat in American history’ and suggested the self-proclaimed embodiment of science could end up in prison over his lies about funding gain of function research that led to the Covid-19 outbreak out of China.

While speaking with Sean Hannity, Cruz fired back at Fauci over the ridiculous comments that he made in an interview on Sunday with CBS Face the Nation where Fauci insinuated Cruz should be the one being investigated and claimed that attacks against him are attacks on science itself, because he – and he alone – represents science.

‘I’ve got to say, Dr. Fauci, I think, is the most dangerous bureaucrat in the history of the country.

He talked about hurting science but I don’t think anyone has hurt science or hurt the credibility of doctors more than Dr. Fauci because, throughout this pandemic, he has been dishonest, he’s been political, he’s been partisan.’

‘(Fauci) said, ‘I represent science. I am science.’ I was laughing. It’s like Louis XIV, the sun king in France saying ‘I am the state.’ It is this delusion of grandeur.”

Cruz also pointed out, once again that lying under oath to Congress is a crime – punishable with up to 5 years behind bars – and that the woke priest of progressivism should be very worried for his past testimony.

Fauci has repeatedly denied funding the – as Rand Paul calls it – “civilization-ending” gain of function research in China, including in sworn testimony to congress, but in October, the National Institutes of Health released a statement that proved otherwise.

‘The statement from Dr. Fauci and the NIH are directly contradictory. I think (CBS interviewer) Margaret Brennan is a talented journalist, but she dropped the ball in not following up and letting him just respond with insult instead of asking the simple question.

Fauci is the most dangerous bureaucrat in the history of the country.

It’s a delusion of grandeur that you cannot criticize him. pic.twitter.com/JBitZewGDK