“That is not a question that we should be even asking”: Press Secretary Responds To Question About Biden’s Stamina [VIDEO] 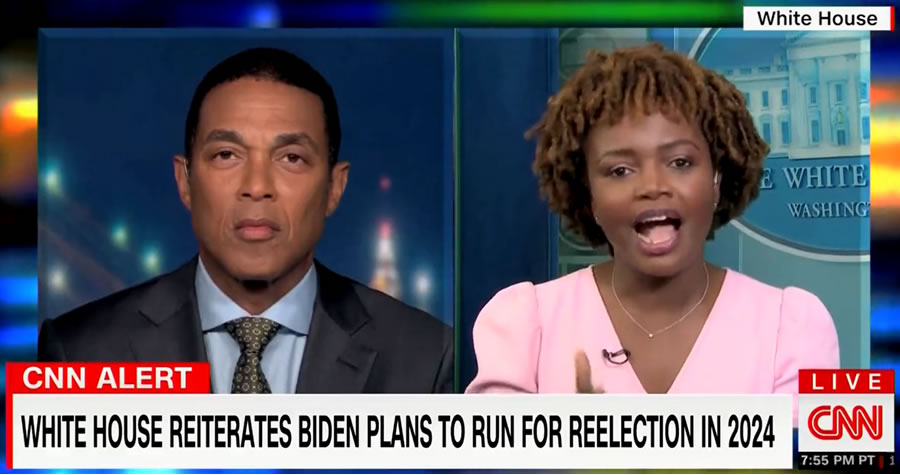 White House Press Secretary Karine Jean-Pierre laughed off a question about President Biden’s stamina after CNN’s Don Lemon asked about 2024 and beyond.

“Does the president have the stamina, physically and mentally, do you think to continue on even after 2024?” he wondered.

“Don! You’re asking me this question, oh my gosh, he’s the president of the United States. I can’t even keep up with him,” she said.

“That is not a question that we should be even asking,” she added. “Just look at the work he does. And look how he’s delivering for the American public.”

She then dismissed concerns from Democrats in a recent New York Times report about the president’s age as “hearsay.”

In the report, former Obama adviser David Axelrod said the president’s advanced age could be a “major issue” in the next election.

“The presidency is a monstrously taxing job and the stark reality is the president would be closer to 90 than 80 at the end of a second term, and that would be a major issue,” he told the Times. “He looks his age and isn’t as agile in front of a camera as he once was, and this has fed a narrative about competence that isn’t rooted in reality.”

Jean-Pierre said the administration’s top concern is how they’re going to “deliver for the American people.”

“That’s what the president talks about,” she added. “That is his focus and that’s what we’ll continue to focus on.”

DON LEMON: "Does the president has the stamina, physically and mentally, do you think to continue on even after 2024?"

KARINE JEAN-PIERRE: "That is not a question that we should be even asking" pic.twitter.com/dUfQil9qKp