‘That’s When I Realized He Was A F*cking Idiot’: Trump Spills On General Milley [VIDEO] 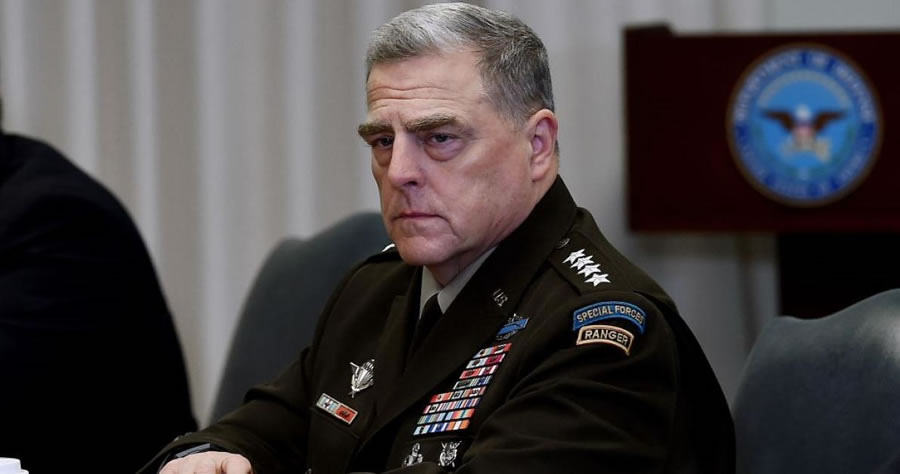 Former President Donald Trump called General Mark Milley, chairman of the Joint Chiefs of Staff, a “f*cking idiot” Saturday, according to the Post Millennial.
At an event at Mar-a-Lago in Palm Beach, Florida, hosted by conservative organization Turning Point Action, a C4 affiliate of Turning Point USA, Trump made the remarks about Milley in reference to the withdrawal from Afghanistan, the outlet notes.
Recalling a conversation he once had with Milley, Trump told the audience that Milley said it would be “cheaper” to leave military equipment in the Middle East rather than bring it back home.

“Sir, sir. It’s cheaper to leave the equipment than to bring it,” Trump began, describing Milley’s advice. Trump listed the millions of dollars of brand new equipment in the Middle East. “You think it’s cheaper to leave it there so they can have it than to fill it up with a half a tank of gas?” questioned Trump.

“That’s when I realized he was a f*cking idiot,” Trump said as the audience erupted in laughter.

Trump also slammed  Milley in September, calling him a “dumbo” while criticizing the infamous phone call Milley made to China warning them of U.S. military strikes. Trump claimed “lightweight” Milley’s decision to make the call was counterproductive and outrageous.

Trump also pushed back on Milley in July after he accused Trump of wanting to launch a coup after the November election. “So ridiculous! Sorry to inform you, but an Election is my form of ‘coup,’ and if I was going to do a coup, one of the last people I would want to do it with is General Mark Milley,” said Trump.

Trump on General Milley telling him to leave the military equipment in Afghanistan:

“That’s when I realized he was a fucking idiot.” pic.twitter.com/fPW0x379g3