The Fed’s preferred inflation gauge rose 5.4% in March, the highest since 1983 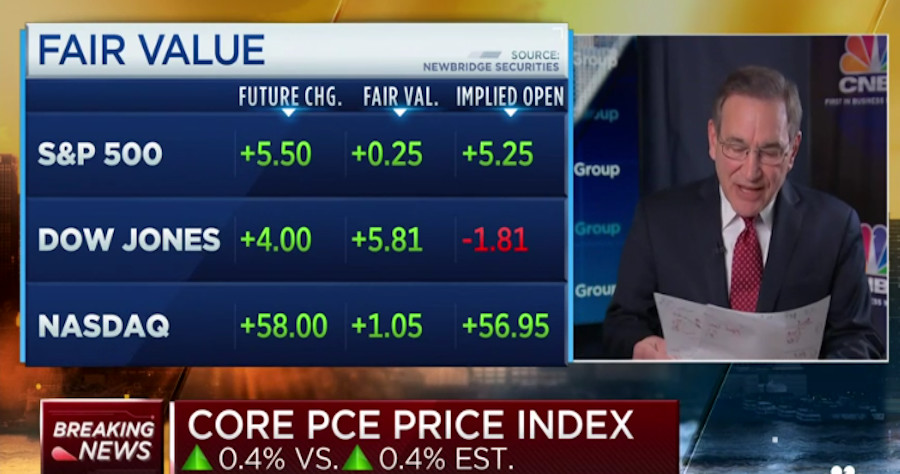 The core personal consumption expenditures price index increased 5.4% from a year ago, the largest increase in nearly 40 years.

Federal Reserve officials consider the PCE gauge to be the most reliable inflation indicator.

Jobless claims edged higher last week to 202,000, above than the estimate.

Excluding food and energy prices, the personal consumption expenditures price index increased 5.4% from the same period in 2021, the biggest jump going back to April 1983.

Including gas and groceries, the headline PCE measure jumped 6.4%, the fastest pace since January 1982.

The core PCE increase actually was a touch lower than the 5.5% Dow Jones estimate. On a monthly basis, the gauge was up 0.4%, in line with estimates.

Surging prices dented consumer spending, which rose just 0.2% for the month, below the 0.5% estimate. Disposable personal income increased 0.4%, a touch below the 0.5% expectation, while real disposable income fell 0.2%. Savings nudged higher to $1.15 trillion, or a rate of 6.3%.

In other economic news Thursday morning, the Labor Department reported that initial jobless claims totaled 202,000 for the week ended March 26. That was an increase of 14,000 from the previous week and ahead of the 195,000 estimate, but still below the level that prevailed prior to the Covid pandemic.

Continuing claims, which run a week behind the headline number and count those who filed for a second week, dropped to just over 1.3 million, the lowest level since Dec. 27, 1969.

While the employment picture has tightened, it is inflation that has captured much of the attention as price increases continue.

The Fed has reacted to rapidly surging inflation by tightening policy, with an interest rate increase in March expected to be followed by hikes at each of the remaining six meetings this year.

Goods prices climbed by 1.1% for the month, the fastest increase since October 2021, pressured by supply chain backups that have bedeviled the economy for much of the pandemic era. Those problems were expected to be “transitory,” a description the Fed had to abandon when it finally capitulated on the loosest monetary policy in its history.

However, the price increases flipped in February from longer-lasting goods to shorter-term purchases. Inflation for durables was flat, while nondurable prices rose 1.8%.

However, energy prices jumped 3.7% for the month — before abating in March — while food inflation rose 1.4%.