The “True” Inflation Rate Is 13.2% – Censorship-Resistant Price-Tracker Built On Blockchain 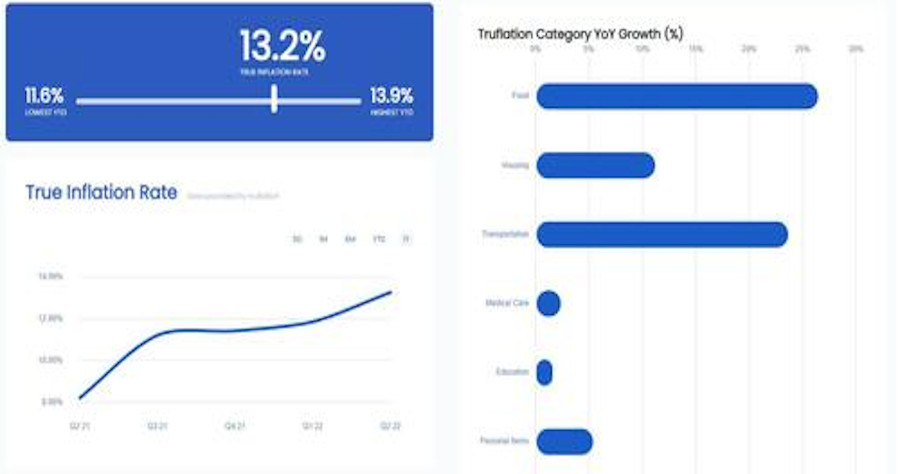 With the official inflation (CPI) rate at +7.9% year-over-year – a 40-year-high – one could be forgiven for believing that the government’s statistics are to be trusted this time (or why would they have ‘allowed’ it to reach such a high level?).

However, with ‘hedonic adjustments’ and such ‘unobservable’ prices as ‘owners equivalent rent’ who can really “know” what the real number is for the average family in America. Worse still, who can trust – given the government’s recent track record which has sent ‘trust’ to multi-decade lows – that a Fed desperate to show its policies are working and a Washington establishment desperate to show some progress ahead of the Midterms will not ‘adjust’ the CPI measure going forward (“see it was transitory after all”) and historically “revise” the worst inflation since Volcker to ensure the public doesn’t lose faith in The Fed’s ability to save the world.

All you need to look at is recent history in other countries, or the CDC on masks, or the censorship of the lab leak theory, to know that the centralized state isn’t going to provide reliable inflation stats.

So, the decentralized network will have to do so. pic.twitter.com/JE1y2vWRdc

What we need is a censorship-resistant, un-manipulatable inflation feed – an decentralized un-deletable history of real prices indexed and available to all.

If inflation censorship occurs the on-chain inflation feed would be the crypto flippening in several respects.

what ETH people were saying about dapps would be proven right

Every piece of the crypto stack could come into play: decentralized file storage, crypto oracles, etc.

Unlike previous efforts, inflation censorship would be much more transparently in service of the dollar regime. Hard to spin. And everyone gets bitten by inflation.
An on-chain inflation feed may be the crypto turning point.

We’d all just be trying to get decentralized consensus on a number, but that consensus is *outside* the centralized establishment.

Public blockchains provide that gathering point: the new hub that can’t be taken down.
Decentralized finance (DeFi) firm Truflation is building a new gauge that does just that.
As Coindesk reports, the key difference between the CPI and the Truflation index is that while the government uses survey data to measure inflation, Truflation looks at price data. The CPI is measured in the form of a survey that collects about 94,000 prices per month for commodities and services and 8,000 rental housing units for the housing component.

“It’s the black box. We don’t know how they made the survey, how they executed it and so on … and the surveys are quite dubious to us as opposed to real price data of the sales point that you can get from real merchants or aggregators,” Rust said.

While the Truflation index is based on the same calculation model as the widely used CPI, it is different because it measures and reports inflation changes daily by using current real-market price data from sources like Zillow, Penn State and Nielsen, among others.

About 40% of the data that is being looked at is the same goods basket that the Bureau of Labor Statistics uses. The remaining 60% is being substituted with data from other sources.

So where does that leave us… what is the “real” inflation rate? The Truflation Dashboard – which runs on Chainlink and is therefore accessible and visible for everyone – says 13.2% (with Food costs up 26.5%)!

That’s quite a difference from the government-sanctioned 7.9%…

Srinivasan sums up this ‘shift’ perfectly (and rather ominously for the centralized state): “More broadly, the monopoly of truth is upstream of the monopoly of violence. A state that can establish what is true (“WMDs in Iraq”) is a state that can justify violence. It is in this sense that decentralized cryptographic truth is the ultimate check on every abusive state…