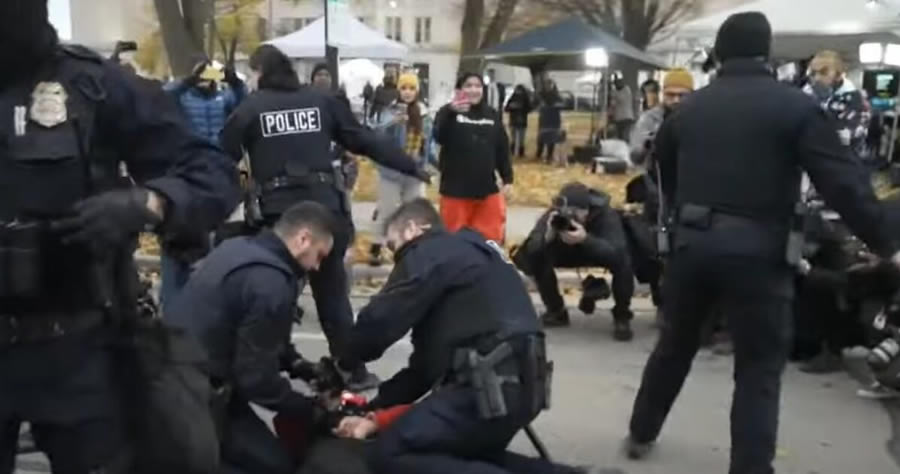 An anti-Kyle Rittenhouse protester who allegedly went WWE on a reporter outside the Kenosha, Wisc., courthouse is reportedly also someone who apparently failed to show up in court after posting bail on previous charges.

Emotions are running high outside the court as the jury enters its third day of deliberations in the case of the Illinois teen who is facing homicide charges for shooting and killing two men and wounding a third during the civil unrest in that city in August 2020.

Pro- and anti-Rittenhouse demonstrators have assembled there along with a heavy police presence from Kenosha County Sheriff’s deputies and Kenosha PD officers.

The above-referenced individual was reportedly spotted wearing a T-shirt that seems to leave no doubt where he stands in the controversy.

“One of the two protesters arrested outside the Kenosha courthouse – the man seen wearing a ‘F— Kyle’ T-shirt as officers took him into custody – is facing charges related to bail jumping, meaning he has a prior criminal record…A Fox News Digital reporter on Wednesday witnessed the male suspect, who was wearing a ‘F— Kyle’ black T-shirt, body-slamming a reporter, attacking a counter-protester and slapping multiple cameras before being arrested,” Fox News reported.

Breaking: One of the violent anti-#Rittenhouse protesters arrested outside the #Kenosha courthouse is Anthony Angel Chacon. He was charged with battery, resisting arrest, disorderly conduct & bail jumping on both a felony & misdemeanor. https://t.co/xbRUbWlTbk pic.twitter.com/6mgEoRxuQb