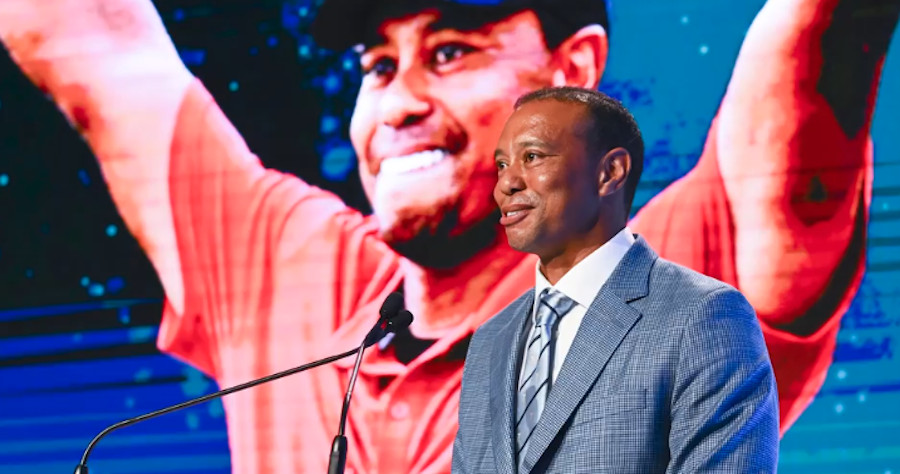 Woods’ 14-year-old daughter, Sam, as she presented him as a member of the World Golf Hall of Fame on Wednesday night at the PGA Tour’s sparkling new headquarters, said, “Dad, I inducted you into the Dad Hall of Fame long time ago.”

The 46-year-old Woods, joining his daughter on stage, melted into her arms and lost it.

The same Woods who used to sear burn marks into his competitors en route to his record 82 career wins, including 15 major championships, became weak-kneed at the sight of his daughter authoring that marvelously poignant moment.

Sam, fittingly dressed in red, was as poised in her speech and presentation as her father used to be while turning out 54-hole leads into wins while donning his Sunday red.

In her speech, she told an amazing story about the day she was born, the same day of the final round of the 2007 U.S. Open at Oakmont, where Angel Cabrera won.

“In 2007, my dad got himself in position to make an 18-foot putt to force a U.S. Open playoff, which he missed by a foot,” she recalled. “He then had to rush to the airport, flew from Pittsburgh to Orlando and drove to the Winnie Palmer Hospital. Within five minutes of walking into the hospital room, still wearing his red golf shirt, on June 18th, I was born.

“He may have lost that day, but he won the greatest gift of all.”

Those words, as they should have, brought down the house, which was filled with a who’s-who of PGA Tour stars.

Sam Woods dominated the night the way her dad used to dominate on the golf course, and it moved him to tears.

“Crap,’’ a watery-eyed Woods said, trying to lighten the moment. “I just lost a bet to [Steve] Stricker that I wouldn’t cry. Thank you, Sam.”

The most powerfully emotional moment came when Sam recounted Woods’ car crash in February 2021 that required multiple surgeries to his right leg and has kept him from competing on the PGA Tour.

“We didn’t know if you’d come home with two legs or not,” she said. “Now not only are you about to be inducted into the Hall of Fame, but you’re standing here on your own two feet. This is why you deserve this, because you’re a fighter.”

Tiger Woods gets emotional about how when he was 14, his family took out a second mortgage so he could keep pursuing his dream of playing golf. pic.twitter.com/PekSeRVThJ

His remarkable legacy is as much about the current group of stars who sit atop the world rankings today as it is about the five Masters green jackets he’s won and his three U.S. Open, three British Open and four PGA Championship victories.

Yes, Woods was the most dominant player the game has ever seen, but that dominance, coupled with his skin color adding diversity to an all-too-white sport inspired the players who own the sport at the moment
There might not be a current top player who wasn’t either drawn to the game or at least influenced by Woods.

“Besides entertaining all of us for 20 years and doing unbelievable things, he inspired the generation of players you’re seeing today,” No. 1-ranked Jon Rahm said.

“He’s everything,” No. 2-ranked Collin Morikawa said. “I grew up watching him. I wanted to compete against him. You wanted to be No. 1 in the world. I just wanted to meet him.”

Now Morikawa, who has won two major championships in the past three years, is beating him.
“When I was in high school, golf was still kind of not really considered a cool sport to play,” Dustin Johnson said. “You kind of were a dork if you played golf. But Tiger made it actually a cool sport to play. Everybody wanted to be like Tiger.”

Rory McIlroy said he “feels fortunate” to have gotten to know Woods.

“There is this sort of saying that you shouldn’t meet your heroes, and Tiger was my hero when I met him, and he lived up to expectations,” McIlroy said.
“I think every pro out here owes a debt of gratitude to Tiger because this sport wouldn’t be where it is today without his impact,” said Patrick Cantlay, currently ranked No. 4.

“He’s created what golf is today and we’re all products of it,” No. 4-ranked Xander Schauffele said. “He’s transformed golf.”

Scottie Scheffler, who’s ranked No. 5 and won last week’s Arnold Palmer Invitational, said he used to watch YouTube highlights of Woods in an attempt to emulate him on the golf course.

His daughter made it a night he’ll never forget.