Tim Scott Rebuttal: ‘Before COVID, We Had the Most Inclusive Economy in My Lifetime’ [VIDEO] 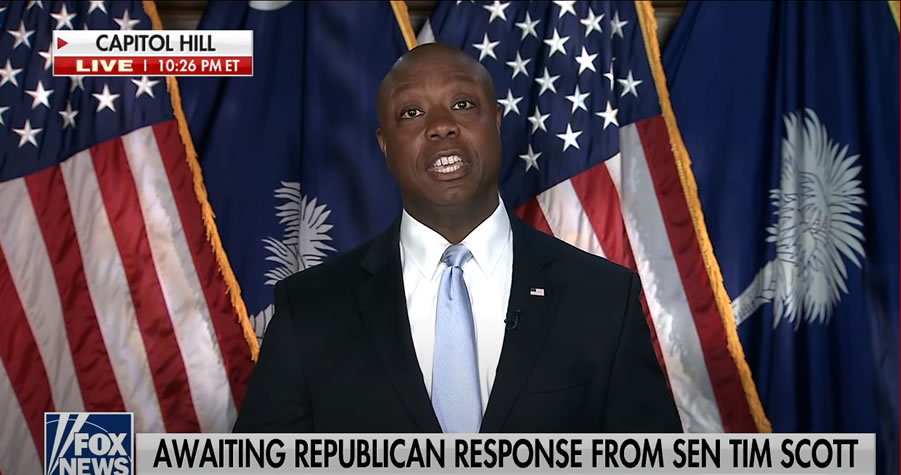 Former President Donald Trump oversaw “the most inclusive economy in my lifetime,” Sen. Tim Scott (R-SC) said Wednesday while delivering the Republican response to President Joe Biden’s first address to a joint session of Congress.
In January 2020, the unemployment rate among black Americans fell to its lowest level in recorded history. Last October, the jobless rate fell faster for black people and Hispanics than white Americans, narrowing the unemployment gap between the races, according to Labor Department data.

The American family deserves better. And we know what better looks like.

Just before COVID, we had the most inclusive economy in my lifetime–the lowest unemployment rate ever recorded for African Americans, Hispanics, and Asians and a 70-year low, nearly, for women.

Wages were growing faster at the bottom than for the top. The bottom 25 percent saw their wages go up faster than the top 25 percent.

That happened because Republicans focused on expanding opportunity for all Americans.  In addition to that, we passed opportunity zones, criminal justice reform, and permanent funding for historically black colleges and universities for the first time ever.

We fought the drug epidemic, rebuilt our military, and cut taxes for working families and single moms like the one that raised me.

Our best future won’t come from Washington schemes or socialist dreams. It will come from you, the American people — black, Hispanic, white, and Asian, Republican and Democrat, brave police officers and black neighborhoods. We are not adversaries. We are family.

We are all in this together, and we get to live in the greatest country on Earth, the country where my grandfather, in his 94 years, saw his family go from cotton to Congress in one lifetime.

So I am more than hopeful — I am confident — that our finest hour is yet to come.