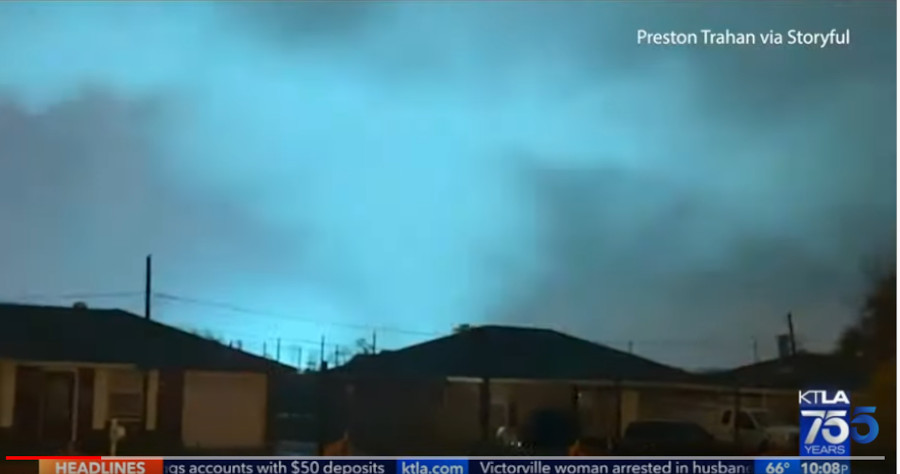 A tornado that menaced the New Orleans area flipped a schoolbus, ripped off rooftops and deposited a house with a family inside it onto the middle of their street. Two people were killed as the storm front blew across the South.

Other tornadoes spawned by the same system caused so much damage in Texas that the governor declared a disaster in 16 counties. Buildings were shredded in Alabama, where torrential rainfall was recorded.

Multiple people were injured. The dead included a woman north of Dallas, Texas, and a person in St. Bernard Parish, next to New Orleans. Authorities didn’t immediately describe how they were killed.

The city of New Orleans escaped significant damage, Mayor LaToya Cantrell tweeted late Tuesday. Tornadoes touched down in Arabi, just east of the city, and further east in Lacombe, across Lake Pontchartrain. The National Weather Service said the Arabi damage had been caused by a tornado of at least EF-3 in strength, meaning it had winds from 158-206 mph.

Television stations broadcast live images as the storm damaged an area about 2 miles long and a quarter-mile in St. Bernard Parish, where Ochsner Health said eight patients were treated in an emergency department.

Louisiana activated 300 National Guard personnel to clear roads and provide security and engineering support. They joined firefighters and others searching to make sure no one had been left behind, said John Rahaim Jr., the parish’s homeland security director.

Residents of severely damaged or destroyed homes in Arabi swept up broken glass and tried to salvage their belongings. The community next to the city’s Lower 9th Ward was wrecked by Hurricane Katrina in 2005, and hit hard again when Hurricane Ida swept through last year.

Stacey Mancuso’s family had just finished repairing the damage from Ida, which ripped off the roof and caused extensive water damage. Huddling in the laundry room with her husband, two children and dogs, they all survived as the tornado blew away part of their new roof.

“We’re alive. That’s what I can say at this point. We still have four walls and part of a roof. I consider myself lucky,” said Mancuso. Still, the twister was the third time they’ve had major weather damage since Katrina.

Entergy reported that about 3,700 of its customers remained without electricity Wednesday. A strong smell of natural gas was in the air, and downed power lines forced emergency workers to walk slowly through the wreckage.

Michelle Malasovich was texting relatives from her home in Arabi when “all of a sudden the lights started flickering.” Her husband saw the twister coming their way.

“It just kept getting louder and louder,” Malasovich said. After it passed, they saw some columns were blown off their porch, and her Jeep’s windows were blown out. Others fared worse: “Our neighbor’s house is in the middle of the street right now.”

The couple inside that home emerged from the wreckage seeking help to rescue their daughter, who was on a breathing machine and trapped inside, neighbors and authorities said.

“A young girl was on a ventilator, her father was looking for firefighters to come help,” St. Bernard Parish President Guy McInnis said. “And they were already in there taking care of the young lady and she’s doing fine.”

Gene Katz said he, his wife and their two children hid in a closet as the tornado ripped through, pushing their home off its slab and caving in the part where they took shelter.

“By the time we closed the door, the roof came off, and that was it,” he said.

Wendy Elizondro said she was dining out with her boyfriend when a neighbor called saying their house had been hit, and he had their dog. She wasn’t sure whether their home would be salvageable.

“I’m not even going to worry about; it’s too full of glass,” she said.

Amid destroyed houses, pieces of debris hung from electrical wires and trees. An aluminum fishing boat was bent into the shape of a C with its motor across the street.

“I wasn’t mentally prepared to see what I was seeing,” said Amy Sims, who jumped into her car when the tornado warning sounded and drove to the Arabi Heights area to check on relatives. She said emergency medics, some crying, were dodging live wires as they went door-to-door through shattered homes.

“A bomb looked like it had gone off,” she said, adding that her cousin’s home and family were OK, but houses all around them were flattened.

As the storm front moved eastward, an apparent twister shredded a metal building and shattered windows east of Mobile Bay. The weather service reported more than 8 inches (20 centimeters) of rainfall in the central Alabama city of Sylacauga overnight. The roofs of several homes were damaged in Toxey, Alabama, where tornado warnings were issued.

The wild weather waned as it moved into South Carolina early Wednesday, but the weather service warned that isolated tornadoes remained possible in southern Georgia.

The vicious weather hit Texas on Monday, with several tornadoes reported along the Interstate 35 corridor. In Elgin, broken trees lined the rural roads and pieces of metal hung from the branches as residents stepped gingerly through the mess.

“There used to be a barn there,” Harkins said, pointing to an empty plot on his uncle’s property, covered with scattered debris.

Texas Gov. Greg Abbott said 10 people were injured by storms in the Crockett area, while more than a dozen were reportedly hurt elsewhere. The Grayson County Emergency Management Office said a 73-year-old woman was killed in Sherwood Shores, about 60 miles (95 kilometers) north of Dallas, but provided no details.