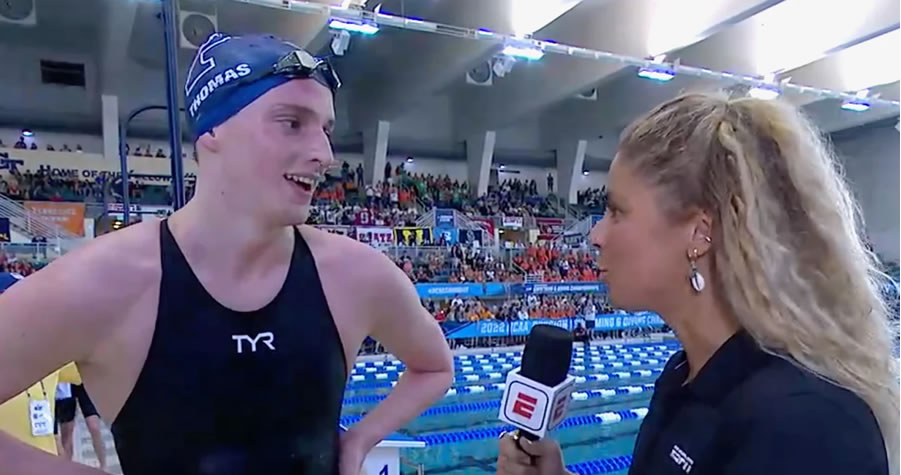 Lia Thomas, the transgender swimmer at the University of Pennsylvania, won the NCAA championships in the 500-yard race on Thursday.

Thomas defeated Virginia freshman Emma Weyant by 1.75 seconds with a time of 4:33.24.

Thomas swam for three years at Penn as a male before transitioning, sat out a year while undergoing testosterone suppression treatment and returned to compete as a woman.

She will also compete in the 200-yard and 100-yard NCAA championships later this week.

Since Thanksgiving, Thomas has been swimming at a rate that suggested she would likely win national titles. She won the Ivy League title in the 500-yard, setting a record at Harvard’s Blodgett Pool in the process in February.

Thomas has come under considerable controversy, as a number of observers have questioned the fairness of an athlete who was born as a biological male competing against women. The NCAA made new regulations about transgender athletes during this season, and essentially left eligibility up to individual sports.

Caitlyn Jenner has weighed in on Thomas; according to Pink News, Jenner said, “I don’t see how you can be happy beating other girls under these circumstances. You have to have a sense of personal responsibility. You can still enjoy sports but not play at a competitive level, right?” In its tweet and headline, Pink News called that “another disgraceful attack on trans athletes.”

Caitlyn Jenner launches yet another disgraceful attack on trans athletes without a hint of irony https://t.co/OTHldu9Lus

No, I just had the balls to stand up for women and girls in sports. https://t.co/FEl2Hav5z6

Kudos on the irony and thanks for standing up for the girls. 👍🏻