Trump Believes Harry and Meghan Marriage Will End: “Harry is whipped like no other person I think I’ve seen” 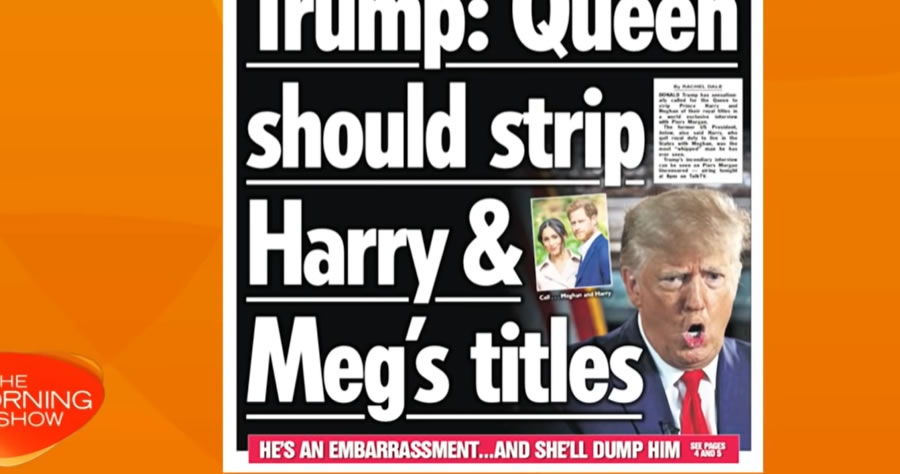 Former President Donald Trump says Prince Harry is “an embarrassment” for turning his back on Buckingham Palace — and predicted the runaway royal’s controversial marriage to Meghan Markle will have a “bad” ending.

Trump, speaking on “Piers Morgan Uncensored” in an interview airing Monday night, maintained that Harry “is being led around by his nose” by his ex-actress wife.

“Harry is whipped. Do you know the expression?” Trump asked Morgan during the sit-down.

“I won’t use the full expression but Harry is whipped like no other person I think I’ve seen,” the former president said.

Morgan famously walked off the set of “Good Morning Britain” last year while refusing to apologize to Harry and Meghan for repeatedly trashing the couple.

Trump told the TV host he sees eye to eye with him on the disloyal royals, who now live in California.

“I’m not a fan of Meghan,” he said. “I’m not a fan and I wasn’t right from the beginning. I think poor Harry is being led around by his nose. And I think he’s an embarrassment. And I think she spoke badly of the royal family but in particular the Queen.”

Trump, who met the Queen when he was in the White House, said the two got along “famously.”

“She liked me and I liked her,” he recalled.

Harry and Meghan — officially the Duke and Duchess of Sussex — married in 2018 but later soured on life as a royal.

Trump told Morgan that he thinks the pair should now be stripped of their royal titles.

“I would,” he said. “The only thing I disagree with the Queen on probably one of the only things ever is that I think she would have said, ‘If that’s your choice, fine. But you now longer have titles.’ You know?

“‘I think that he has been so disrespectful to the country, and it’s a great country,” Trump continued, referring to Harry. “I own a lot of things there….”