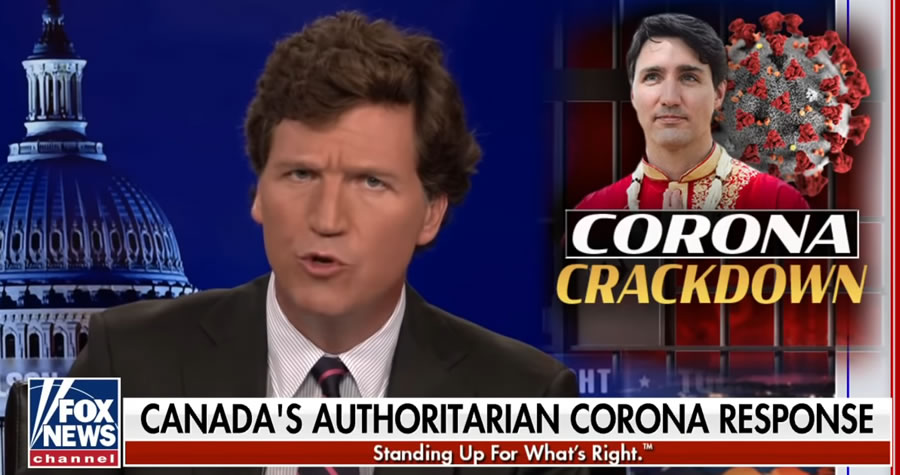 Carlson warned there could be some that would like to see similar policies implemented in the United States.

CARLSON: First tonight, what if your next door neighbor suddenly went dangerously insane and started holding people hostage in his house? Would you consider that threatening? Would you even notice it?

Those are not theoretical questions. Something very much like that just happened in our national neighborhood. Canada, the landmass directly to our north, our single largest trading partner, the country with whom we share the longest international border in the world, Canada, took a dramatic move toward legitimately dangerous authoritarianism — in Canada, yes.

Here’s just one measure of it. On Monday, the country’s Prime Minister, Justin Trudeau, outlined his government’s new corona regulations.

Canadians hoping to return to their country must be tested before and after takeoff, he said, quote: “If your test results come back positive, you’ll need to immediately quarantine in designated government facilities. This is not optional.”

Designated government facilities — now when this happens in other countries, and it does, we call those facilities internment camps. But because this is Canada, we’re talking about, a place we assume as passive and polite and Anglo to the point of parody, no one thinks to use that term. In fact, no one thinks about it at all.

Trudeau’s internment policy has been in place since last month. And as far as we can tell, no major U.S. network has even mentioned it. And neither has our State Department, which ordinarily seems to exist to make unhappy noises about human rights violations around the world.

But not a word about Canada.

Preconceptions may play some role here. We assume that in turning people as what Russia does, boring people is what Canada does. But not anymore. Suddenly, Canada is a flagrant violator of the most basic human rights. Fail a COVID test and they will lock you up without trial and go ahead and try to disobey.

According to the Canadian government, anyone who attempts to avoid these rules, detention in a government determined facility for example, could face a million dollar fine and three years in prison.

This is Justin Trudeau’s Canada.

It’s funny, Trudeau always seemed like a cheerful idiot, wearing weird costumes and yammering on about diversity. Who knew he was Mussolini? There might be a lesson here for other nations that are led by shallow neoliberal empty suits.

Know any? Underneath all the chirpy identity politics talk, it’s not a joke. It is internment cells.

In Canada, where everything has a euphemism, those cells are referred to as approved quarantine hotels. What are they like? Well, as noted, they are internment cells. What do you think they’re like?

There are shortages of food and water. You could be sexually assaulted as you’re held in one.

Listen to a member of the Canadian Parliament explain what they’re like.

UNIDENTIFIED FEMALE: The liberals instituted a federal hotel quarantine requirement for those entering Canada. We have heard reports that is taking hours to get through to book these hotels, dietary restrictions are not being met, and food and water is not always readily available. That’s an addition to this program continuing after reports of sexual assault. This is mind boggling.

CARLSON: Oh the liberals did this. It is not very liberal to intern people, is it? According to a report in the “Post Millennial,” the doors in many of the internment facilities don’t lock. Detainees have no way to protect themselves while they sleep, hence the sexual assault.

They also don’t have access to adequate medical care. In one case getting authorities detained a man with diabetes called Ray Truesdale. What was Truesdale’s crime? Well, it was flying from Tennessee to Toronto on a business trip.

As he waited in confinement for his corona test results, his jailers forgot to feed Truesdale for more than 24 hours. Ultimately, Truesdale left his cell and went downstairs in search of something to eat. And there he found others who were being held without food.

“They were screaming,” he said. In the end, Canadian authorities informed Truesdale that his coronavirus sample had been damaged somehow, so he had to remain in internment.

Or consider Mitch Beaulieu, a Canadian who landed in Calgary after a business trip to Florida. He told Canadian television the experience was very much like a kidnapping. He was put, quote, “in a black van with tinted windows and taken to an undisclosed location.” “Where am I going?” He asked, “Why am I going there?” The response, “We will tell you everything when you get there.”‘

He thought it was a prank, he thought it had to be, but it wasn’t a prank, quote, “I got out there and there was plastic all over. People walking around in hazmat suits. It was like jail pretty much.”

That claim, that conspiracy theory said CBC that the Federal government is preparing to forcibly intern Canadians is patently false. The CBC assured Canadians the government was preparing quote, “voluntary quarantine sites.” Yes, voluntary in the sense of being mandatory, which is what they are, they’re mandatory.

And by the way, as a matter of science, how does packing infected people into crowded internment facilities reduce the spread of the coronavirus? That’s a good question, and some have asked the Canadian government that very question, but they haven’t explained.

We do know — and this is significant — that Canada has fallen far behind other advanced nations in distributing the vaccine which is interesting given the decades of propaganda all of us here have been subjected to about the glories of the Canadian healthcare system.

According to Andrea Taylor, who researches this at Duke, Canada, quote, “Had more faith in the global supply chain than other countries.” Oh, they believed it worked. The globalism thing, that turned out to be a big mistake, but rather than admit the globalist stupidity is why they can’t get vaccines to their population, Justin Trudeau has decided to punish his own citizens.

It’s his fault and the population gets punished. Do you recognize that impulse? Does it look familiar to you?

It should because neo-liberalism is always the same no matter where you find it.

What’s so interesting is that Canada’s new rules apply only to COVID patients. Other transmissible diseases are exempt. People with AIDS aren’t being sent to internment facilities. Thank God. No one has tried that since Fidel Castro did it in the 1980s. Drug resistant tuberculosis is fine, too. That’s a real problem, but not in Canada. Only COVID, a disease with a 98 percent survival rate.

Weirdly, too, and you may recognize this as well. At the same moment they are clamping down on travel by their own citizens, the Canadian government has announced plans to admit 400,000 new permanent residents from other countries over the next eight months.

And by the way, that number will increase substantially over the next couple of years. None of those people, those immigrants from the third world will be forcibly quarantined in Canada. We’re not calling for them to be, but it’s interesting the difference.

They won’t be arrested. In fact, they’ll be rewarded because they’re not citizens. Only the citizens are punished.

Back in November, Justin Trudeau admitted what’s going on here. It’s not about coronavirus, stopping the virus saving lives, no. This pandemic, he said is an opportunity to permanently change Western civilization.

JUSTIN TRUDEAU, CANADIAN PRIME MINISTER: This pandemic has provided an opportunity for a reset. This is our chance to accelerate our pre-pandemic efforts to reimagine economic systems that actually address global challenges like extreme poverty, inequality, and climate change.

CARLSON: The Great Reset, and we don’t want to give Justin Trudeau too much credit. He may be sinister, but he’s not smart. It’s not like he thought that phrase up. No, he took it from his role models in this country.

At a forum hosted by the World Economic Forum in mid-November, John Kerry, our new climate czar laid it out. Yes, he said, The Great Reset will happen, “And I think it will happen with greater speed and with greater intensity than a lot of people might imagine. In effect, the citizens of the United States have just done a Great Reset. We’ve done a Great Reset, and it was a record level of voting. We’re at the dawn of an extremely exciting time.”

But for power mad leaders hoping to eliminate centuries of constitutional restraints on their own ambitions, it is indeed an exciting time.

But then you wonder, if that’s true, why are Joe Biden and Kamala Harris still wearing their silly little obedience masks everywhere they go? They’ve been vaccinated, so is everyone around them. So why the masks? Why the restrictions? What exactly is going on here?

We know it’s not science. We know that for certain.

According to the CDC, once you are vaccinated, of course, you don’t need a mask anymore.

DR. ROCHELLE WALENSKY, DIRECTOR, CENTERS FOR DISEASE CONTROL AND PREVENTION: We can kind of almost see the end. We’re vaccinating so very fast.

Our data from the CDC today suggests, you know that vaccinated people do not carry the virus, don’t get sick and then it’s not just in the clinical trials, but it’s also in real world data.

CARLSON: Well, we hope vaccinated people don’t carry the virus, otherwise, why are we getting all these vaccines? What’s the point? It turns out, the real world data confirms commonsense. Once you get the vaccine, you don’t need a mask. That’s a Biden employee.

So why is everyone still wearing it? Why are people with vaccinations walking alone outside with masks on? Why are Joe Biden and Kamala Harris wearing masks? Sincere question.

You think our media would ask that once in a while, but they’re not. They’re asking very different questions, in the other direction. In fact, they’re heckling members of the opposition political party, people who have been vaccinated and demanding that despite the vaccination, they put their masks back on.

UNIDENTIFIED MALE: Would you mind putting on a mask for us?

SEN. TED CRUZ (R-TX): Yes, when I’m talking to the TV camera, I’m not going to wear a mask and all of us have been immunized. So —

CRUZ: You’re welcome to step away, if you like. The whole point of a vaccine, CDC guidance is what we’re following.

Now watching that does make you wonder, how would our media react here in the United States if Dr. Fauci one day reluctantly concluded that actually, we need coronavirus internment facilities in this country? Obviously, first safety. We don’t want to violate anyone’s rights.

But we’ve got to have them. Sorry.

How would our media respond?

Take a look at the clip we just played again. Look it up on the internet. You see that reporter and you realize that person badly wants Ted Cruz tossed into the back of a black van for coronavirus noncompliance, hauled away and not just Ted Cruz, but you, too.

In fact, all the disobedient politically inconvenient people held without trial on public health grounds, of course, until they no longer pose a mortal threat to the rest of us. And by the rest of us, of course, we mean, the good people, the people who obey.