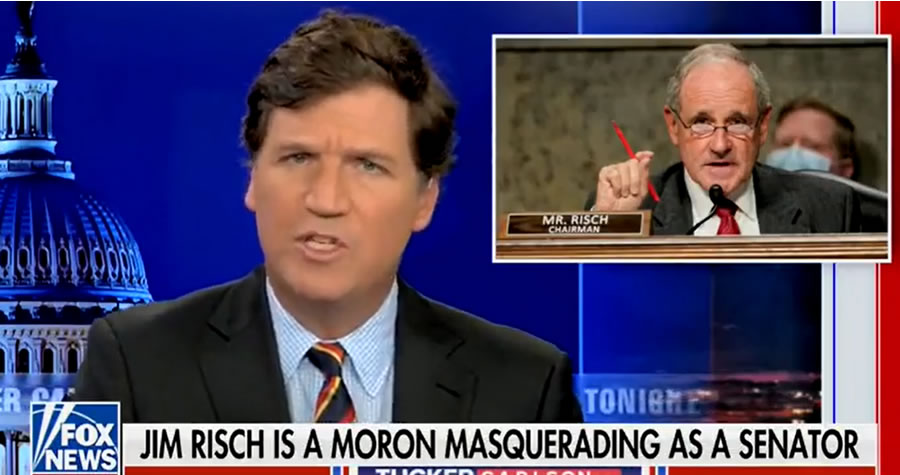 Fox News host Tucker Carlson has picked another fight with a Republican lawmaker who is standing up for Ukraine.

It was Senator Jim Risch’s (R-ID) turn to feel the heat from Carlson after he played some of the senator’s comments on FNC’s “Tucker Carlson Tonight.”

“The people who are saying that we shouldn’t be engaged in this at all are going to be singing a very different tune when they go to fill up their car with gas, if indeed there is an invasion by Russia. It is going to cripple their oil production and as we all know, Russia is simply a gas station that is masquerading – thinly disguised – masquerading as a country,” Risch said on CNN Sunday.

Carlson was not impressed:

“‘Russia is a gas station masquerading as a country.’ That’s a good line. Here’s another version of it: Jim Risch is a moron masquerading as a U.S. senator. How else could you explain what you just heard? Risch promises to throw more sanctions on Russia, which are gonna make your gas prices go up here in this country. But somehow that’s your fault because you’re not patriotic enough to defend Ukraine.

“How do people like this get elected in Republican primaries?” he wondered.

Carlson then played another line from Risch noting that Ukraine is a pro-Western democracy: “Ukraine is a democracy. We side always with countries that are democracies.”

The Fox News host took issue with that statement as well.

Idaho Sen. Jim Risch, top Republican on the foreign relations committee, is the latest GOP politician in the crosshairs of Tucker Carlson:

"Jim Risch is a moron masquerading as a U.S. Senator"